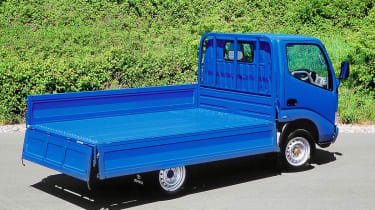 The Toyota Dyna dates back to 2001 and follows the Japanese light-truck formula of a forward-control cab, with driver and passengers sitting over the front axle. This gives the potential for a relatively long load area compared with the overall length of the vehicle, making it an attractive model for builders and landscape gardeners operating in urban areas, where parking spaces are tight.

The Dyna is available as a chassis cab, giving buyers the option to fit bodywork of their choice. Toyota also sells ready-bodied dropside and tipper models. The Dyna is available in 300 (3,000kg gross weight) and 350 (3,500kg GVW) models, giving three different lengths. 300 models are only offered with a short wheelbase and a choice of chassis-cab, dropside and rear-tipper bodies.

The same options are repeated for the 350 medium-wheelbase model, except that the tipper body will tip to either side as well as the rear. The long-wheelbase model is offered as a chassis cab or with dropside body. All models are powered by the same 3.0-litre diesel engine, producing 144bhp.

The Dyna’s engine is a less-powerful version of the four-cylinder 3.0-litre diesel engine that powers the Land Cruiser. The Dyna doesn’t lend itself to good aerodynamics, with a large front area and open bodywork. Even so, the combined fuel consumption figure ranges between 28.2mpg and 32.5mpg, with equivalent CO2 emissions of 229g/km to 263g/km. Under the circumstances, that’s not too bad.

Equivalent figures are not available for the Isuzu Grafter, Fuso Canter or Nissan Cabstar, all models sharing the forward-control layout, but classified as light trucks, for which published fuel consumption and emissions data is not yet required.

The Dyna offers a great deal of flexibility in terms of load space. Toyota has the most popular body options covered in the shape of the dropside and tipper bodies, supplied from the factory. These are lightweight aluminium bodies, sourced from Scattolini and fitted at the Toyota factory. The dropside body is available for all three Dyna wheelbase lengths, while the short-wheelbase model is available with the rear-tipping body and the medium-wheelbase chassis with the three-way tipper.

The dropside body offers load lengths up to 4,460mm for the LWB model, and the tipper up to 3,150mm. For those wanting different bodywork, possibly for transporting cars or machinery, Toyota dealers should be able to help find an appropriate bodybuilder. This would almost certainly be the surest route to ensure that the bodywork complies with the requirements of European whole-vehicle-type approval, which came into force for vehicles of this weight. The chassis rails are 800mm apart and cross members don't protrude above the side members to help with body fitting.

The payload allowance for the 350 MWB dropside is fairly good for a 3,500kg-GVW vehicle at 1,525kg. The 350 LWB-chassis cab has a payload allowance of 1,790kg, but buyers would have to factor in the weight of the bodywork fitted, which would probably bring payload down to around 1,500kg, depending on the bodywork required. Nissan offers the Cabstar at higher gross weights, up to 4,500kg GVW, but drivers who gained their full licence after 1 January 1997 won't be able to drive these models without an HGV licence.

Nissan offers a box body for the Cabstar, giving buyers more options than Toyota, but, as we have said, Toyota dealers will probably be able to help if other bodywork is preferred. The three-way tipper is a useful option for small building jobs as it allows the content to be tipped in tight spaces.

ESC electronic stability control is not an option. ABS brakes are standard, as required by law. The Dyna’s forward-control design doesn't give cab occupants the protection of the semi-forward control design of most vans in a frontal impact, and the same can be said of rivals such as the Nissan Cabstar, Isuzu Grafter and Fuso Canter. There are side impact protection beams and a driver’s airbag. The cabin has seats for three, but the centre seat is only equipped with a lap belt. It’s a Toyota and comes with a tried-and-tested diesel engine. It has a good reputation for reliability and rugged construction.

This is probably the Dyna’s weakest area. Perched on top of the front axle, the driver feels every movement of the suspension and can look forward to a bouncy ride. Compared with a semi-forward-control van – now the conventional layout for most vans – it doesn't offer the refinements of ride and handling that most drivers have come to expect.

The diesel engine offers good torque output at 300Nm, across a broad spread from 1,200rpm to 3,200rpm, so there's plenty of pull at lower speeds. As we suggested, it's best suited to local running. Drivers need to get used to turning into corners a bit later than usual because of the seating position.

On the plus side, the cabin design gives a relatively high seating position and, with plenty of glass in the cab and no bonnet, the driver has a good all-round view. But the bouncy ride doesn't add to the comfort for either driver or passengers.

The cab design limits interior space and with it, storage space. There are overhead trays, a glovebox, door pockets and cup holders, but there's no space under the seats for storage. The driving position feels distinctly old-fashioned, with a more horizontal steering wheel than in most vans, and the steering column between your knees.