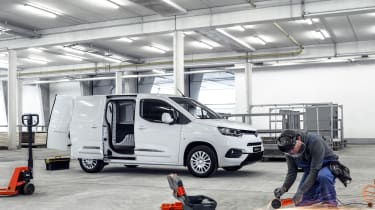 This is the Toyota Proace City van, the latest rival for the Vauxhall Combo that is available in short and long wheelbase form. It will make its debut at the Commercial Vehicle Show in Birmingham in September.

Full technical specifications are yet to be announced, but Toyota has confirmed that the new Proace City will feature a range of petrol and diesel powertrains, offering outputs between 74bhp and 128bhp. Buyers will also have the choice of either a five- or six-speed manual or an eight-speed automatic transmission.

Toyota’s “Smart Cargo” system is available as an optional extra, adding a folding outer passenger seat and a hatch in the rear bulkhead, providing an extra 400 litres of volume and a 1,300m increase to the Proace City’s load length. A range of storage points also feature throughout, ranging from coin and cup holders to an aircraft-style overhead storage locker. 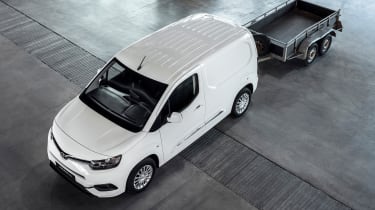 As an optional extra, buyers can spec Toyota’s Smart Active Vision system. Consisting of a pair of dedicated cameras and a ceiling-mounted five-inch screen, it relays a real-time view behind and alongside the vehicle, which Toyota claims allows the driver to effectively “see through the metal panels.”

Toyota’s “Traction Select” system is also available as an optional extra, allowing the Proace City’s dynamics to be adapted to differing road conditions. Using a rotary controller, drivers can select from Normal, Snow, Sand and All-Terrain modes. Prices for the new Proace City haven’t been announced, but we expect they’ll follow shortly after its release at Birmingham.

Now read our review of the Toyota Proace. Let us know your thoughts in the comments section below…