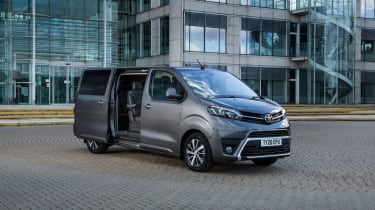 Toyota has updated the Proace panel van and Proace Verso people carrier for the 2021 plate change, improving both vehicles’ level of standard equipment. Both models will go on sale in September, with first deliveries expected to arrive the following month.

Proace panel vans now come as standard with Toyota’s Smart Cargo system, which adds a load-through flap for the cargo bay bulkhead, increasing the van’s maximum load length by 162mm. The package also adds lumbar support and an armrest for the driver’s seat, as well as a folding passenger seat which Toyota says can double as a desktop.

Entry-level Proace and Proace Verso Active models also now come with an alarm and manual air conditioning as standard – and Toyota has made its in-built satellite navigation system standard across the model line-up.

Now read our review of the Toyota Proace here...