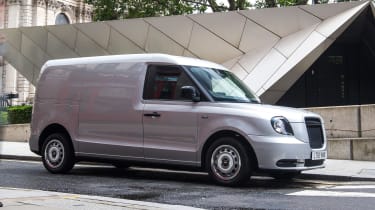 LEVC has released further details on the VN5 range-extender van’s trim-levels, specs and powertrain. It’s available to order in the UK now, with prices starting from £46,500. First deliveries are expected to arrive towards the end of the year.

When the LEVC VN5 finally hits the streets, it will join a growing market of eco-friendly light commercial vehicles, such as the Vauxhall Vivaro-e, the Volkswagen ABT e-Transporter and the plug-in hybrid Ford Transit Custom.

Buyers have their choice of three trim-levels – Business, City and Ultima. The entry-level model comes as standard with autonomous emergency braking, driver and passenger airbags, dual-zone climate control and a nine-inch infotainment system. 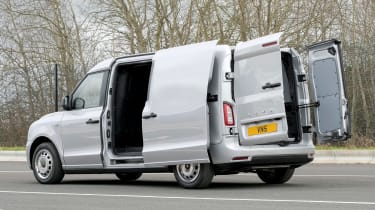 Like the TX, the VN5’s body is built around an aluminium frame, which is clad in high-impact plastic body panels. The van’s front end is also the same design as the TX, so there are CSS and Chademo charging ports either side of the grille.

At the rear, the VN5 has new body panels which create a square and uniform cargo bay, with a maximum capacity of 5.5 cubic metres – enough to swallow two Europallets. The van’s battery pack and electrical components are also mounted under the floor, which maximises its carrying capacity.

As standard, the VN5 will have a single side door and 60:40 opening barn doors at the rear. The latter has an opening of 1,038mm, which allows pallets to be side-loaded. The VN5 also has a payload of 830kg, to help LEVC to compete in what the company describes as the “new one-tonne electric van” class.

It’s powered by the same 1.5-litre three-cylinder petrol engine, 31kWh battery pack and rear-mounted electric motor as the TX taxi – and, like the cab, there’s no physical connection between the engine and the wheels, with the combustion unit only kicking in occasionally to keep the battery pack topped up. 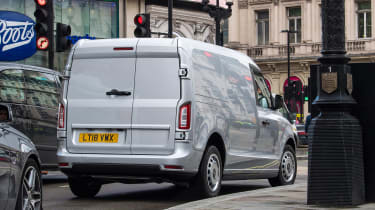 So, most of the time, the VN5 works like an electric vehicle, with LEVC claiming that its powertrain will provide “more than 58 miles” of pure-electric motoring. Once the battery pack has been depleted the range-extender petrol engine can boost the van’s maximum range to 300 miles – which LEVC says eliminates the range anxiety of a conventional electric vehicle.

Every model also offers support for both domestic 11kW AC charging and commercially available 50kW DC fast-charging. When using the latter system, LEVC says the VN5’s battery pack will recover a 100 percent charge in 30 minutes – or roughly the same amount of time taken to load and unload the vehicle.

Here's our round-up of the best electric cars to buy right now...