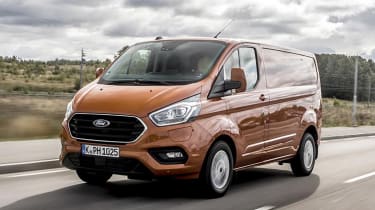 Most electric vans have to offer a trade-off between payload and range. With the Transit PHEV though, Ford has produced a van with a payload of over 1,000kg that can still offer a useable all-electric range that’s bound to interest urban van drivers and fleet owners. We look forward to seeing how the full production version fares once it arrives next year.

The Ford Transit Custom PHEV is a van that aims to offer something that no other van can. It's the only plug-in petrol-electric hybrid van for sale in the UK, and it offers a compromise for van buyers looking to switch from diesel, but still have too much range anxiety to take the plunge with full electric drive.

The Transit Custom PHEV is based on Ford's mid-sized model, but replacing the diesel drivetrain with a petrol-electric one hasn't compromised on the van's cargo capacity of six cubic metres, while payload weights are roughly similar, too, with up to 1,130kg on offer.

At the moment, the Transit Custom PHEV comes in the single L1H1 body style, while an 8-seat Tourneo Custom PHEV is also available. Both versions come with Ford's 124bhp 1.0 EcoBoost petrol engine, which is mounted in series with a 92.9kW electric motor and 13.6kWh lithium-ion battery pack. This set-up has an official all-electric range of 35 miles, while overall range is around 310 miles, although if you plug the van to charge the battery every time you park you'll see a tankful of fuel last a lot longer. Charging takes 4.3 hours via a standard 3-pin plug, while fast charging from a Type 2 socket takes 2.7 hours.

As with any other plug-in hybrid, the Transit Custom PHEV starts in silence, as the petrol engine only fires up if the battery is completely depleted. In electric mode, the van is quiet and refined, and only emits a low-level hum to let other road users know of your presence. Once on the move, the van is simple enough to drive, with no gears to deal with, it's easier than your average van to drive. 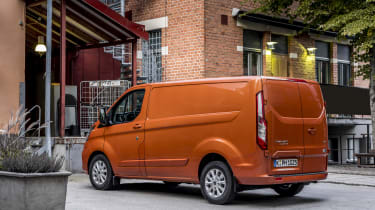 Electric drive gives the Transit Custom a surprising turn of speed off the line, with the instant torque of the electric motor capable of spinning up the front wheels if you're not careful. There are two drive modes to choose from, either D or L, with the latter offering battery regeneration when slowing down which is similar to lifting off the throttle in a low gear in a manual car. It works well, although you need to get used to modulating the pedal to make sure it's not too jerky.

There are four drive modes that are selectable via a dashboard button: EV Auto, EV Now, EV Later and EV Charge. EV Auto is the default setting, which automatically manages energy flow between the wheels, motor, battery and engine. EV Now allows you to drive on electric power alone, while EV Later saves the battery charge for later in your journey. Finally, EV Charge uses the engine to replenish the battery, but this mode uses a lot of energy and defeats the object of running a plug-in model.

When the engine fires up, you can hear it as a distant thrum from under the bonnet, and it only really gets vocal if you demand harder acceleration, when you're climbing a steep slope, for example. And once you're up to motorway speeds, engine noise is overtaken by wind noise from around the door mirrors anyway.

The PHEV drives just like the standard Transit Custom. There's no perceptible difference in the way it drives, thanks to the low-slung battery mounted under the load floor. In fact, the only difference you'll experience is the fact you need to unlock the fuel filler flap from inside the cabin, rather than just opening it manually. 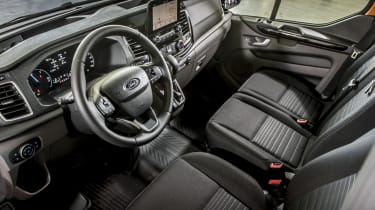 Claimed fuel economy is 91.7mpg, but that will vary depending on how often or little you charge the battery. One highlight of the Transit Custom PHEV is the addition of built-in 'geofencing' module that allows owners to specify determine zones where the van will prioritise electric drive. This can be useful in ULEZ cities, and other specific areas that you might desire.

Overall, the Transit Custom PHEV is still a great van, and the addition of plug-in tech is a useful mid-term solution for buyers wanting to go green but without the fear of all-electric running. The only real stumbling block is the price. With prices starting from around £39,000 ex-VAT, it's not cheap, but reduced everyday running costs mean that the PHEV's total costs of ownership (TCO) isn't that far removed from a standard diesel auto van. And if you work in a congestion charging zone, then the benefits will be even clearer.