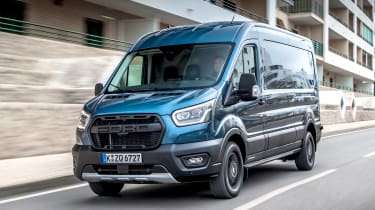 While four-wheel drive is a bit of a niche option on the Ford Transit, it's the perfect fit in the new Trail trim. The chunkier looks complement the Transit AWD's off-road ability, and it'll head surprisingly far off the beaten track - certainly a lot further than most users are ever likely to travel. Add in the improved looks and user-friendly cab, and this is one tough 4x4 van.

The Ford Transit range has expanded to include this, the new Transit Trail. It's an off-road variant that focuses on go-anywhere ability, and it also gets a more rugged look that is shared with the likes of the F-150 and Ranger Raptor pick-up trucks. Trail models are marked out by black cladding for the lower sections of bodywork and wheelarches, while the grille features oversized Ford lettering. Black 16-inch alloys complete the exterior look.

Inside, the Trail adds easy-clean leather seat upholstery, while standard kit includes air-conditioning, a heated windscreen and wing mirrors, front and rear parking sensors, an alarm, cruise control with speed limiter and Ford's Pass Connect telematics software, as well as the Sync3 infotainment with Apple CarPlay and Android Auto smartphone compatibility. The Transit Trail comes in L2 and L3 lengths and H2 and H3 heights, while a Double Cab version is also available.

Power comes from 130PS (128bhp), 170PS (168bhp) and 185PS (182bhp) versions of Ford's 2.0 EcoBlue diesel. Front-wheel drive and a mechanical limited-slip differential come as standard, but the mid-range 170PS diesel is also offered with Ford's Intelligent All-Wheel Drive system. This is fully electronic, so there are no manual controls for it, just a button on the dashboard that selects a Mud and Ruts option when conditions become extreme.

Trail models are manual-only, and first gear is short enough to act as a low-ratio option. We tried the Transit AWD fitted with all-season tyres on an off-road course usually reserved for 4x4s, but it impressed with its ability. Keep in first and second gear, and you have some of the ability you'd get from a low-range gearbox, with the AWD system maintaining control when negotiating steep downward slopes. There was plenty of power and grip to climb steep inclines, while traversing a 25-degree slope showed the van's inherent stability, thanks to the relatively low centre of mass.

Overall the Transit Trail delivers great off-road ability, but you'll pay the price in terms of running costs. While four-wheel drive will make life easier for some buyers, the trade-off that comes with 28.5mpg official fuel economy will need to be weighed-up by operators.