The Ford F-150 may be America's best-selling vehicle for 34 years running, but is it any good to drive? 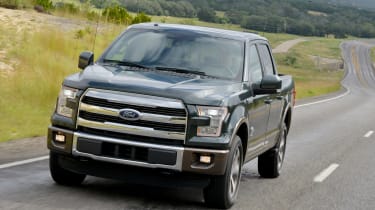 Unlike the Mustang, this isn’t a car we’ll be begging Ford to sell in the UK. That said, it’s easy to see why the US loves the F-150. It drives like a car but can carry more than some small trucks. Ford’s commitment to smaller capacity petrol engines means the F-150 won’t cost an arm or a leg to run, either.

While the market for pick-up trucks in the UK is growing, it's small potatoes next to the might of the US - and a huge proportion of those trucks sold in the states carry the famous Ford F-150 name. It's been the best-selling vehicle over there for 34 years and its dominance looks set to continue, as it's simply the default choice for a huge number of buyers. Despite increasingly stringent emissions regulations, its time at the top of the market looks set to continue well into 2016.

In the States you can now buy your F-150 with a 2.7-litre V6 EcoBoost engine. It uses the same philosophy as the tiny three-cylinder 1.0-litre you find in the Ford Fiesta – using turbocharging and smaller capacity blocks to maintain power but decrease fuel consumption. 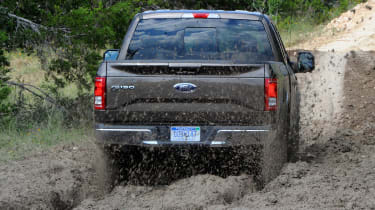 In fact, Ford claims 24mpg on the European combined cycle and estimates CO2 emissions of 224g/km – from the large petrol-powered pick-up. A decade ago, you would’ve seen similar numbers from a Land Rover Freelander. And with petrol sitting at around half the price it is in the UK, the F-150’s going to cost mere pennies to run.

The Ecoboost engine is silky smooth on the road thanks to the extra three cylinders, and never feels strained like the dinky 1.0 engines of the same name. The steering-mounted gear lever is decidedly old fashioned, but to us Brits it’s a nod that only adds to the retro feel of this hugely capable truck.

But perhaps most surprising was how car-like the F-150 felt to drive. The thought of driving it in congested UK cities – or even up the M1 – would fill most drivers with dread, but on the big open roads south of San Francisco, it felt more than at home. 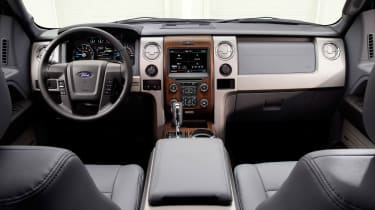 The steering was pleasingly direct, and the instant throttle response made light work of overtaking. The single-clutch auto isn’t as speedy as VW’s DSG, but it handles the big torque well and can drop cogs quickly when you ask it to. Ok, it’s no Ford Focus on a twisty stretch of road, but it’s not half bad.

That said, the F-150 still suffers from that notorious pick-up problem of feeling jittery and uncomposed in normal driving. The lack of weight over the rear axle is particularly evident – forcing the F-150 to crash and jolt over uneven surfaces. However, in our experience this is likely to improve when you fill up the load bed and make use of some of that one-tonne load capacity. 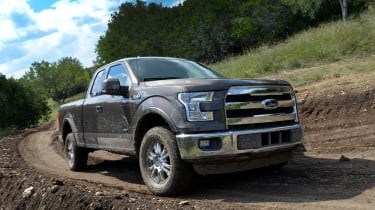 Inside, it lags behind some of Ford’s European-focused efforts. Our mid-range XLT sits above the entry-level XL – adding invaluable kit like auto lights, carpet mats and electric windows – but it lacked the large touchscreen found in modern-day Mondeos. You’ll also find a load of scratchy plastics atop the doors and dash, but it’s easy to forgive it when you consider what most buyers will use it for.

Practicality and storage is exceptional – as you’d expect in a car this big. There’s enough room in our SuperCab model for three to sit across the back, while up front you sit far enough from your passenger to need walkie-talkies at motorway speeds. Actually, that’s unfair – as the deep tyres and whisper quiet V6 do a great job of making this F-150 feel refined and stable at high speeds so you don’t have to yell at your passengers to be heard.