A used Ford Transit can be a cheaper alternative to a brand new van, here’s how to find a good one 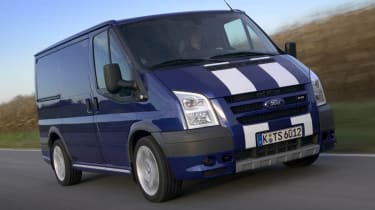 At the time of the last upgrade in 2012, Ford’s Transit was capturing around 40% of the UK van market in both the 1 tonne and 2 tonne sectors, so there will be plenty of vans to choose from. With such a choice of body sizes, power outputs and trim levels, it is worth taking a look at a range of vehicles to decide exactly what version best fits your requirements. That said, as Transit has been Britain’s number one van for almost 50 years, whichever one you go for, you won’t go far wrong.

Ford’s Transit van has for many years been the default choice in the medium and large van sectors. Transit will be 50 years old in 2015 and Ford’s favourite has dominated the UK van market for most of that time. That means that there are plenty of used models available, to suit all budgets.

Ford has now separated its 1 tonne Transit Custom from the full size 2 tonne Transit model, matching its major competitors with two distinct lines. However the outgoing Transit covered everything from a 1 tonne short wheelbase to a 4.6 tonne Jumbo model.

Often seen as the fourth major generation, although oddly also known as Mk6 and Mk7 by some, the last Transit debuted in 2000. It was facelifted in 2006, then upgraded further in 2012 and its this model that we are looking at here.

There were front, rear and even all-wheel drive models available, though with only around 300-500 4x4 vans sold in the UK each year, these are few and far between.

These were 100hp with 310Nm of torque, 125hp and 330Nm of torque or 140hp and 350Nm for front-wheel drive models. Rear-drive vans used the 100hp and 125hp engines, but also came with a range-topping 155hp engine with 385Nm of torque. The AWD model was only available with the 125hp engine and a six-speed manual gearbox was standard on all Transit models.

There were also two ECOnetic vans, built on the 100hp short wheelbase 280 and the 125hp long wheelbase medium roof 350 models. Specially calibrated engine management, a longer final drive ratio, Auto-Start-Stop and a 70mph speed limiter promised up to 39.8mpg and 189g/km of CO2. The Auto-Start-Stop and switchable speed limiter were also available on other models as part of an ECO Pack, boosting fuel economy across the range.

Service intervals were extended in 2012, to 20,000 miles, though larger fleets may well have had their vans into the dealer more often. Vans were originally covered by a three-year/100,000 mile warranty, so any early problems should have been taken care of. 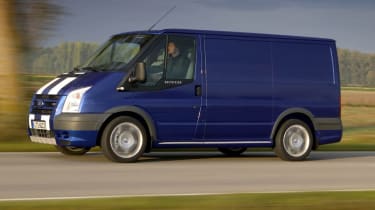 With a dealer on almost every high street or industrial estate, finding parts or service for a Ford Transit is never going to be difficult. The 2.2-litre Duratorq engine is reliable and strong, so should deliver economical service for many years to come.

There have been a few recalls, including a chafing coolant hose for models built between 2008 and 2010, plus a power steering pipe fitting, but nothing major.

As with all used vehicles, it is worth checking the service history and confirming mileages with past MOTs. With so many vans available there is no need to buy the first one you see.

All Transit models provide a comfortable, short or long distance driving position. The 100hp engine is more than up to the task of hauling a fully laden 3.5 tonne van, though the 125hp motor is more relaxed.

If you are regularly looking to run at full load or to tow, then it is worth seeking out the less popular 140hp and 155hp engines, as they deliver far more pulling power without any major fuel consumption sacrifice.

Ford was one of the few manufacturers at this time to provide all Transit models bar the AWD van with Electronic Stability Programme (ESP) as standard. This incorporated Hill Start Assist, Brake Assist and Brake Traction Control, helping to boost driver safety.

There is little difference between front and rear drive from the driver’s seat, with both offering stable handling and easy manoeuvrability. Front drive vans do have a lower load floor, while rear drive models deliver improved traction when towing and working at full load.

There were three trim levels on Transit at this time, with the most popular base models having a full height steel bulkhead, daytime running lights, a Quickclear heated windscreen, electric windows and steering column controls for the stereo.

If you can find one, a Limited trim Transit is worth seeking out, for its air conditioning, 10-way adjustable driver’s seat, perimeter alarm and additional load area protection. Body coloured bumpers and alloy wheels make a Limited van easy to spot. 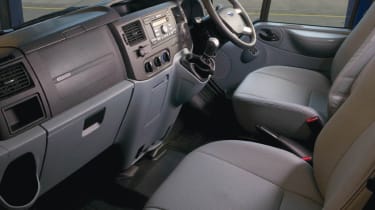 Even more rare is the Transit SportVan, based around a short wheelbase 280 model with the 140hp engine. It has stripes up the bonnet, a sporty body kit and 18” alloys.

With three wheelbases, four body lengths and two roof heights there are certainly plenty of Transit models to choose from. Gross weights range from 2.5-4.6 tonnes, with payloads of 772-2,238kg and load volumes of 6.0-14.3m3.

Ford also produced double-cab-in-van versions of all three wheelbases, offering a second row of seating with a bulkhead to separate the passengers from the load area. Of course Transit is also available as a single or double cab chassis, for conversion to dropside, tipper, Luton and many other body styles.

There are a host of alternatives to Ford’s Transit, though in most cases manufacturers split their 1 tonne and 2 tonne models into separate van ranges, like VW’s Transporter and Crafter, or Mercedes’ Vito and Sprinter. Vauxhall, Renault and Nissan are also competitive at this level with Vivaro/Trafic/Primastar taking on the smaller Transit models and Movano/Master/NV400 targeting the larger ones.

Fiat, Citroen and Peugeot joined forces to take on Ford’s market leader, with jointly produced models for the 1 tonne and 2 tonne markets. The USP of this trio though is that all models, even the larger Ducato, Boxer and Relay, are rear-wheel drive only, resulting in competitive loadspace and payloads, but perhaps making them less suitable as towing vehicles or heavy-duty long haul vans. For real heavy-duty work, Iveco’s Daily also makes a strong competitor to the rear drive Transit.