The evergreen Ford Transit is more car-like yet more practical than ever before, voted Best Van of 2013 at the Auto Express awards 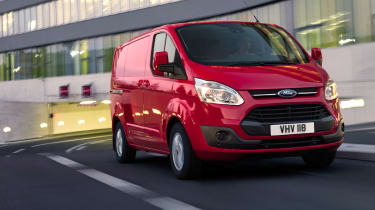 The Transit is now better than ever, and it’s a worthy new addition to a line-up that has enjoyed more than two million sales in the UK since 1965. A more car-like driving experience added to decent performance and economy make it a truly relaxing choice – and that’s judging it against many traditional cars. The new Transit Custom is let down only by poor visibility and slightly awkward pedals, but looks certain to continue Ford’s commercial vehicle success.

Ford says the new Transit is the most important new model it will build in the next two years. That includes the forthcoming Mondeo and facelifted Fiesta, and shows just how serious the manufacturer is about its big-selling van.

The Transit will be sold virtually unchanged across the globe, with three variations of the tried-and-tested 2.2-litre TDCi diesel used in the outgoing model. That means 99bhp, 153bhp and the 123bhp version we drive here.

Thanks to eco tweaks such as stop-start, our short-wheelbase Transit Custom is around eight per cent more efficient than the van it replaces. So it returns class-leading 42.8mpg economy and emits 178g/km of CO2.

The impressive numbers continue into the load bay, too, with Ford claiming a maximum capacity of 5,520 litres. That’s 330 litres more than in the old SWB Transit. Plus, a clever hatch beneath the passenger seat means extra length to carry long, narrow objects.

Behind the wheel, you could almost think you’re in a Focus. The dash is near-identical, with a logical layout and solid-feeling buttons. However, this is still a van, and some of the plastics used don’t meet the usual high standards of Ford’s passenger models. There’s a commanding view out, but large A-pillars can make junctions a little tricky.

The TDCi is refined, and motorway driving is a breeze thanks to a generous 350Nm of torque. (There were no 99bhp models available during our test, but we suspect it’d feel slow.)

Despite its boxy shape, the Transit is remarkably quiet on the move. It can catch crosswinds, but the direct and well weighted steering means it feels safe. It’s not all good news, though: the high-mounted pedals quickly became an annoyance – especially considering there’s nowhere to rest your left foot.

The all-new Transit is more car-like to drive than ever, but with all practical aspects of a van improved in every way. Our top-spec Limited costs £21,245, which makes it slightly more expensive than nearly all its rivals.

But you’ll be willing to pay a premium if you’re looking for the best – and, judging from our drive, the Transit is certainly that.