The Ford Transit comes in 15 styles and can carry payloads between 764kg and 2,238kg. It can offer low running costs and is good to drive 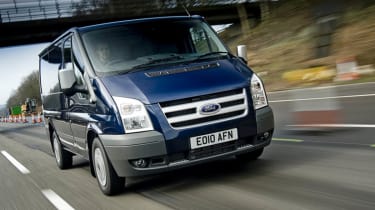 The Ford Transit has been Britain’s best-selling van for nearly 50 years, and the current version – introduced back in 2000 – is due to be replaced by an all-new Transit, which has a launch date of 2014. This new model will follow the styling of the Transit Custom, which was crowned Auto Express Van of the Year 2013. But until this arrives, buyers of the existing model still get a great van.

There’s a choice of front, rear and all-wheel-drive models, all with a 2.2-litre diesel engine. This provides 100bhp, 125bhp or 140bhp power outputs in FWD versions, 100bhp, 125bhp, 135bhp or 155bhp in RWD models and 125bhp in AWD vans. All versions of the Transit van feature a six-speed manual gearbox as standard.

The Transit ECOnetic follows the ECOnetic models in the Ford car range by promising low CO2 emissions and fuel consumption, while the top-spec Transit Sport Van brings some fast Ford fun to the line-up, as it features 18-inch alloys, 235/45 tyres, bonnet stripes and twin exhausts.

The vast range comprises three wheelbase lengths, four body lengths and three roof height options, so buyers can choose everything from a regular panel van to crew cab and Luton versions, and from a Transit minibus to a tipper. In fact, the Transit brand has been extended, with a new Transit Courier now joining the latest Transit Connect small van, while the Transit-based Tourneo is a people carrier that can transport up to nine adults.

Ford offers two Transit ECOnetic models, which use a combination of a stop-start system, low-rolling-resistance tyres and a switchable 70mph speed limiter to keep fuel consumption low. The 100bhp short wheelbase low-roof ECOnetic offers CO2 emissions of 173g/km – the equivalent of 43.5mpg fuel economy on the EU combined cycle – while the long-wheelbase 125bhp version promises 189g/km and 39.8mpg. Most regular Transit panel van drivers should realistically be able to achieve mid-30s mpg, although those running their van fully laden up and down motorways will obviously get through more diesel.

Service intervals are among the least generous in this class, with every Transit needing a check-up every year or 20,000 miles – the Fiat Ducato only requires a service every 30,000 miles, while it’s every 24,000 miles for the Mercedes Sprinter and every 25,000 miles for the Renault Master and Vauxhall Movano. Still, insurance group ratings are competitive, with the Transit ranging from groups six to nine.

Transit buyers can pick from front-wheel drive, rear-wheel drive and all-wheel drive, depending on how they will be using their van. Generally, front-wheel-drive versions have a lower load floor, which will appeal to users who step up and down into the load area often, or load their van manually.

For those who run at or near the maximum weight most of the time, rear-wheel drive will be the best option, as they’ll get the strongest traction, with the weight over the driven wheels. The all-wheel-drive Transit features higher ground clearance, and is designed for limited off-road use.

There are 15 Transit van bodystyles and capacities, with a choice of short, medium and long wheelbases, plus regular van and double-cab-in-van options. Ford offers the short-wheelbase Transit with a low or medium roof, while the medium-wheelbase version comes with low, medium or high roof options. The Jumbo van tops the range, featuring a massive 4,122mm load length and a high roof. All body lengths can be specified with the double-cab-in-van option, which seats up to six people, as it features a second row of three seats in the cab.

Of course, this extra passenger capacity comes at the expense of load space, although some users won’t mind as it allows them to use the van as family transport at the weekend.

Whichever version of the Transit you go for, the load volume trails rivals. The biggest Jumbo van offers 14.3 cubic metres, but this can’t match the likes of the Citroen Relay, Fiat Ducato and Peugeot Boxer, which have up to 17.0 cubic metres. But that’s not necessarily a disadvantage. Pack any long-wheelbase, high-roof, 3.5-tonne van to the roof, and it will almost certainly be overloaded. A smaller body could help you stay on the right side of the law. The Transit's payload stretches up to 1,665kg for 3.5-tonne (3,500kg) gross weight MWB models – that’s more than most rivals, although the Nissan NV400, Renault Master and Vauxhall Movano all offer more.

Impressively, the Transit has topped van reliability surveys, beating rivals from the likes of Volkswagen and Mercedes, so buyers can choose this van safe in the knowledge that it won’t let them down.

Extensive underbody zinc galvanising and a 12-year anti-corrosion warranty add to the appeal. Standard equipment includes load-sensing ESP stability control; this also features on the Mercedes Sprinter and VW Crafter, but it’s only offered on rear-wheel-drive or passenger carrying versions of some other rivals.

Ford also includes a full-steel bulkhead, to keep the load away from the cab in the event of a crash. A driver’s airbag is standard, too, with passenger and side curtain airbags options, as is the case with competitors. Not many Transit owners have reported major problems, although you should check for damage if buying second-hand.

As with any van, the Transit can live a hard life, while it’s also hugely popular among van hire fleets. Wheels can be damaged by kerbing, so check the steering geometry. Also look out for damage to the body, especially on models without a plywood-lined load area, although second-hand buyers will be pleased to hear that parts are cheap and widely available as the Transit is so common.

The chassis engineering expertise Ford demonstrates in its cars is evident in the Transit, too, with the van offering better ride and handling than many rivals. It can be surprisingly agile along a twisty country lane, although hard driving isn’t recommended with a full load on board.

There are more powerful rivals – the Fiat Ducato has a maximum power output of 177bhp, the Mercedes Sprinter offers up to 190bhp and the VW Crafter delivers up to 163bhp – but 140bhp or 155bhp versions of the Transit deliver adequate performance. And they still provide reasonably low fuel consumption, to keep fleet managers happy.

Inside, the Transit has a car-like feel, with major switchgear and instruments borrowed from the Ford passenger car range of the mid-2000s. And as part of an interior overhaul in 2006, the company followed the lead of the Mercedes Sprinter, Peugeot Boxer and Vauxhall Movano by moving the gearshift to the dashboard.

Useful storage spaces give the Transit cabin a real mobile office feel that will appeal to many users – these include large door pockets and two two-litre bottle holders, while a storage compartment on the top of the dashboard has a lid that flips over to become a small table, complete with cup-holders.

A heated windscreen is included as standard, as are electric windows, tinted glass and a radio/CD player with MP3 input, plus Ford has recently added Bluetooth hands-free phone connectivity and voice control to help users run their business on the move. The imminent new Transit will take this a step further by using the clever Ford SYNC system for fully integrated hands-free and voice commands.