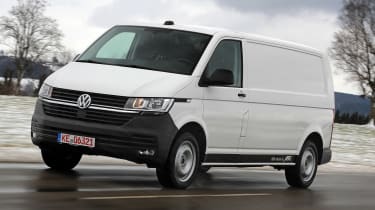 This is the new, all-electric Volkswagen ABT e-Transporter, which joins a number of all-electric vans now on sale in the UK.

Unlike the Volkswagen e-Crafter, the e-Transporter is a collaborative effort between Volkswagen and the German tuning company ABT, rather than an in-house developed project.

It’s based on a modified version of the combustion-engined Transporter’s platform, which is fitted with a 109bhp electric motor and a 37.3kWh battery pack mounted under the cargo bay floor. The motor sends drive to the front wheels via an updated version of the standard van’s dual-clutch automatic gearbox.

The e-Transporter’s maximum range stands at just 82 miles. However, Volkswagen expects the majority of e-Transporters will be used as last-mile delivery vehicles, covering an average of around 50 miles per day. Regarding performance, 0-62mph takes 17.4 seconds.

Volkswagen has also stated that the e-Transporter could eventually be offered with a larger 74.6kWh battery pack, if there’s enough demand in the market – which should see its maximum range increase to around 150 miles. 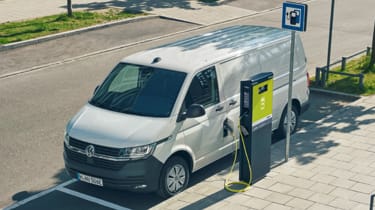 The e-Transporter offers support for 50kW DC fast charging, which allows the battery to recover an 80 percent charge in just 45 minutes. The battery pack can also be topped up using a domestic 7.4kW AC wallbox charger, which will provide a full recharge in around five-and-a-half hours.

Prices start from £42,060, excluding VAT and the Government’s £3,000 plug-in vehicle grant, with first deliveries expected to arrive during the second half of the year. Currently, buyers have a choice of two trim-levels and two seating layouts. Standard equipment includes a 6.5-inch touchscreen infotainment system, a four-speaker stereo, a couple of USB ports and three-abreast seating up front – although buyers can have a second seating row in the rear of the van for an extra £4,315.

One highlight of the e-Transporter is that it has the same carrying capacity as the standard T6 Transporter – sharing the same 6.7 cubic metre load bay and one-tonne payload as the conventionally powered long-wheelbase model.

In addition, because ABT converts vans directly from the Volkswagen production line, its electric drivetrain can be fitted to any version of the T6, including the Caravelle executive shuttle and even the California camper van.

Do you think the Volkswagen ABT e-Transporter’s 82-mile range is sufficient? Let us know in the comments section below…

Get more from Auto Express 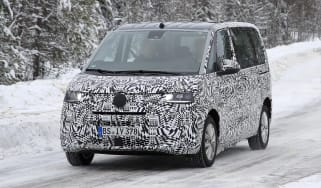 The Volkswagen Transporter is a class act in the mid-sized panel van class, its refinement, comfort and technology all stand out
Visit Best Volkswagen campervan conversions 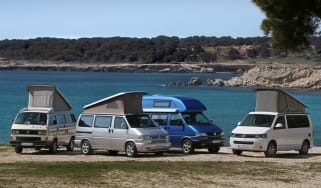