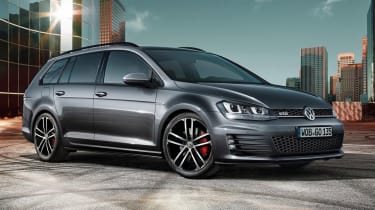 Volkswagen is set to introduce a new hot estate in the form of the Golf GTD Estate, revealed ahead of its official debut at the 2015 Geneva Motor Show.

It's the first time a hot diesel Golf has been added to the brand's estate line-up, and it follows the scorching petrol Golf R Estate revealed last year. We expect it to cost from just over £27,000 in the UK.

Aimed squarely at Ford's recently-facelifted Focus ST Estate, which also features a diesel engine for the first time, the Golf GTD Estate will carry over the diesel engine and chassis from the hatch. It also retains the familiar hatchback styling traits of a honeycomb grille, more aggressive bumpers and flared sills. 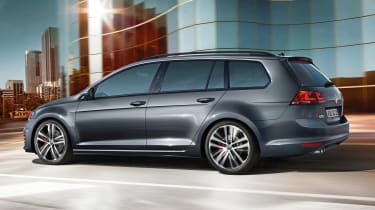 Inside, it's familiar GTD fare, with black headlining, chequered door trim and stainless-steel pedals. The 620-litre boot of the regular Golf Estate will likely remain unchanged, eclipsing the 476-litre load space in the Focus with the seats up.

The hatchback running gear means a power output of 181bhp and 380Nm of torque from the 2.0-litre four-cylinder TDI engine, taking the GTD estate from 0-62mph in 7.9 seconds with the six-speed manual gearbox. That's down 0.4 seconds from the hatch, due to the weight penalty of around 100kg. The option of a six-speed DSG automatic gearbox will likely reduce that 0-62mph time by a fraction.

Fuel consumption is quoted at 64mpg – 3mpg down on the hatchback – while CO2 emissions range from 115g/km, which is also marginally less impressive than the standard GTD. The car is expected to go on sale in April, ahead of first deliveries in June, and pricing details will be revealed in the run-up to Geneva. 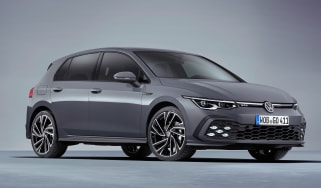