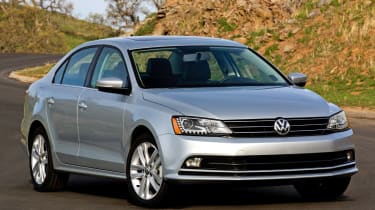 The Volkswagen Jetta saloon has been given a mid-life refresh, ahead of its debut at the New York Motor Show next week. A subtle facelift and an updated engine range make up the bulk of changes, with sales in the UK kicking off in August and first deliveries scheduled for November. 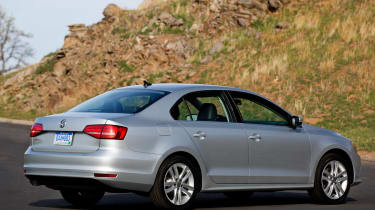 Mechanically, the current 1.6-litre diesel has been dropped from the engine lineup, leaving developments of the current 1.4-litre petrol and 2.0-litre diesel available. A 148bhp 1.4-litre TSI engine is now available, while the 2.0-litre TDI motor comes with option of 109bhp or 148bhp. Official economy figures are yet to be revealed.

All models will be fitted with BlueMotion technology to help boost efficiency, which includes features such as stop/start and low rolling resistance tyres. VW has also improved the aerodynamic efficiency of the Jetta by 10 per cent.

The Jetta is VW’s best selling car in North America, with more than 189,000 models sold there in 2013 compared to around 2,000 UK sales. Official pricing will be revealed closer to the car’s launch, but prices should remain around the £21,000 mark.