It’s a practical, economical saloon, but the VW Jetta isn’t nearly as inspiring as the more up-to-date Golf 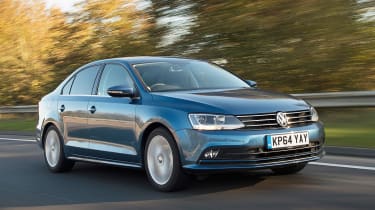 You get the feeling that VW offers the Jetta for sale in the UK because it’s there, rather than to fulfil any pent-up demand for a Golf derived four-door saloon. The model is far more significant in farther-flung world markets, and is quite a rare sight over here.

There are arguably good reasons for that, apart from the UK market’s long-standing reluctance to get excited by booted versions of popular hatchbacks. Although the Jetta is commonly described as ‘a Golf with a boot’, it lags behind the latest Golfs in engineering terms and looks quite a bit more dowdy too. In fact, the car’s ‘sensible shoes’ nature means many buyers will look to other cars in the VW Group line-up like the Skoda Rapid which has the same traditional booted looks (although it’s really a hatchback), while the more expensive Audi A3 and Mercedes CLA saloons are more exciting propositions altogether.

The engine line up for the Jetta is familiar with plenty of petrol TSI and diesel TDI options, and you can also specify a Jetta automatic with VW’s popular DSG dual clutch gearbox option.

And then of course there’s the boot, which at 510-litres looks pretty enormous but is less impressive when compared to the Skoda Rapid’s 550-litres, and its ‘seats down’ total of 1,381 litres.

The Jetta doesn’t sit on the MQB platform that underpins cars like the current Golf, Audi A3 and our 2013 Car of the Year, the SEAT Leon; it’s based instead on previous-generation Golf foundations. And although European Jettas get multi-link rear suspension and electric power-steering – US models made do with a simple torsion beam and hydraulic assistance until very recently – it feels outclassed. 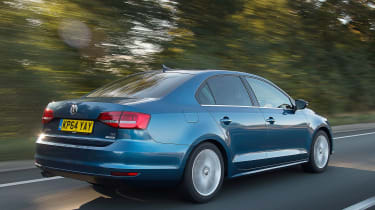 Compared to newer VW Group products and the sharp-handling rival Mazda 3, the Jetta feels a bit wooden. It handles safely without any nasty vices, but the steering does feel slow and a fraction heavy at low speed, while the front tyres surrender grip sooner than the Mazda 3’s. The Sport model’s 15mm lower suspension gives the ride a slightly firm edge and even in this set-up the Jetta never feels as agile, responsive or grippy as the Mazda.

The most efficient Jetta in the line-up is the 2.0-litre TDI with 108bhp. Stop-start features as standard and this engine returns a claimed combined 70.6mpg. CO2 figures are low at 105g/km. Even the more powerful 2.0-litre TDI is claimed to return 67.3mpg on the combined cycle.

Our experts predict the Jetta will retain 40.1 per cent of its value, meaning you’ll wave goodbye to £14,160 over three years. At least the company’s fixed-price servicing scheme looks better value for money, at just £299 for three years.

It’s difficult for the Volkswagen Jetta to be branded anything other than ‘a Golf with a boot’, since it shares so many styling cues with its hatchback cousin. However, it’s only under the skin where the sixth-generation Jetta has anything in common with theGolf, because none of its body panels is interchangeable with the hatch.

Still, the straight lines and upright shape of the Jetta are uninspiring, especially when you park it next to rivals like the rakish Kia Optima. The new tail-lights at the rear are the most obvious change.

Climb inside, and the similarities between the Jetta and Golf are more apparent. However, it’s not the current Mk7 Golf that the Jetta resembles, but the previous model. VW has kept interior revisions to a minimum, with new instruments, steering wheel and different fabric trim, but the black plastic, dark upholstery and white-on-black instruments all look a bit plain when compared to the Kia.

The Jetta’s trademark long rear overhang makes space for a vast boot that offers a maximum capacity of 510 litres, which is 130-litres up on the Golf hatch. Even better is the fact that it unlocks and swings open automatically with the press of a button on the key fob.

The back seats have a 60:40 fold, while there’s a through-load facility behind the centre armrest, although the plastic cover doesn’t clip in place and falls out pretty easily. 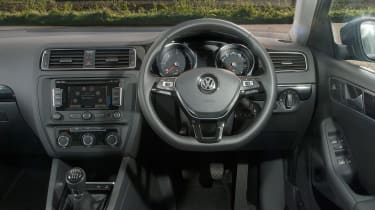 Back seat space is reasonable, and there are rear air vents, while the large back windows make up for the dark interior trim and give a greater sense of space than is actually on offer.

Up front, there’s plenty of wheel and seat adjustment for the driver to get comfortable. The deep door bins and twin cup-holders behind the gearlever are handy, although the rear one can become blocked by the sliding armrest on top of the central storage bin.

Volkswagen ranked 19th out of 33 manufacturers in our Driver Power 2014 survey, with a surprising 26th finish for reliability, which contrasts sharply with its reputation for durability. However, the Jetta uses proven engines and components, plus it’s produced in vast numbers. Stick to the maintenance schedule, though, and the Jetta should run on without a hitch.

Standard safety equipment includes curtain airbags, but rear side airbags are a £275 option. You have to pay £465 to add parking sensors, and the Jetta seems a little under equipped.

It was tested by Euro NCAP in 2011, where it earned a five-star rating and a 94 per cent score for occupant protection. The updated car sees extra safety kit added to the options list, such as blind-spot monitoring with rear-traffic alert. 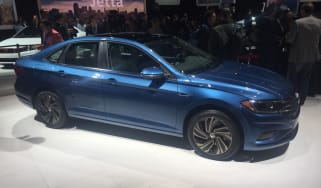 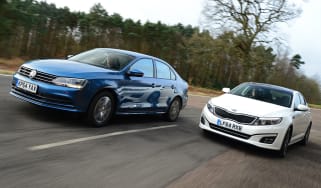 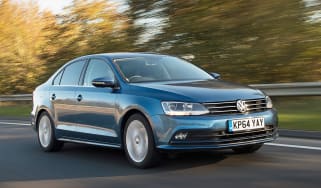 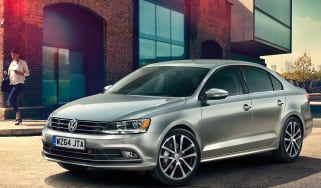 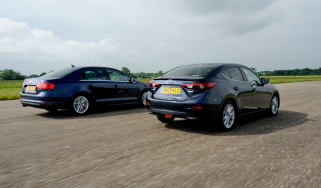 Do four-door versions of our favourite hatchbacks have the same appeal? We compare new Mazda 3 Fastback with VW Jetta
New Volkswagen Jetta 2014 revealed 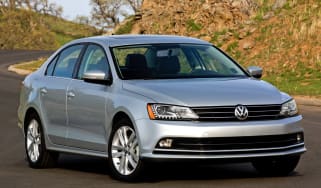 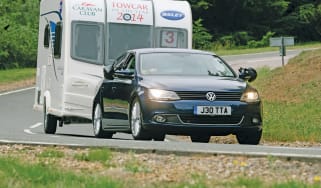 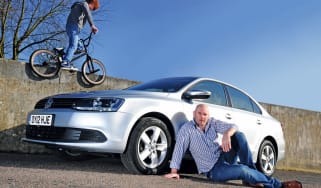 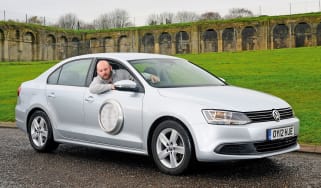 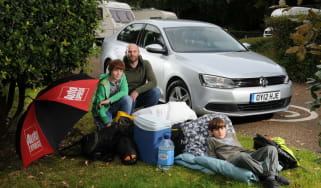 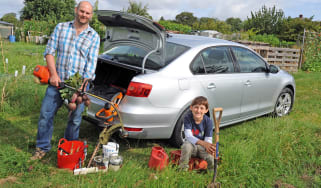 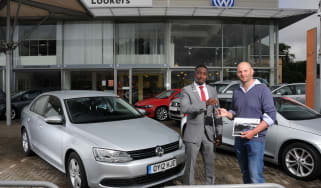 The new VW Jetta joins our fleet, but will it be as easy to live with as a hatch for our family man?
VW Jetta vs Rivals 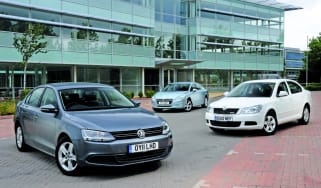 Does VW's new Golf Saloon make sense for family buyers? In its first test we pitch it against Skoda's Octavia hatch and the Peugeot 508 to find out
Volkswagen Jetta 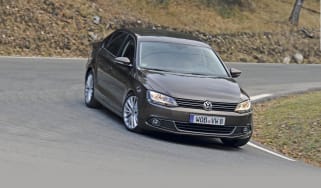 VW’s latest mid-sized saloon attempts to step out of Golf’s shadow and make an impact of its own
Volkswagen Jetta 2.0 TSI 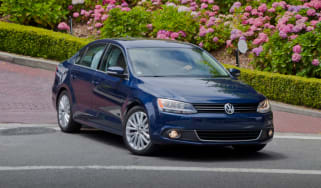 Is Golf-based saloon still a bridge too far for British buyers? We hit the road in the US to find out.
Advertisement
Volkswagen Jetta (2006-2010) review 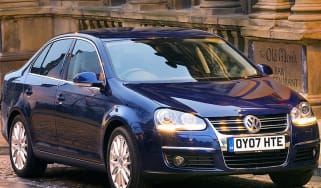 The Jetta is not the most charismatic product, but it is extremely practical.
Volkswagen Jetta 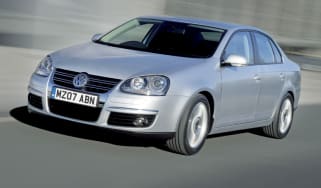 If you want more thrills than the TDI version can offer, the TSI is the pick of the Jetta range.
Volkswagen Jetta 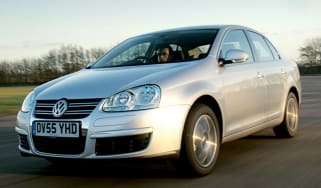 How many names does it take to change the image of a four-door Golf? Volkswagen hopes the answer is only three.
Volkswagen Jetta 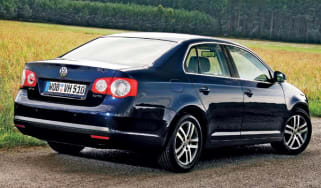 There is no doubting the popularity of VW's Golf - the latest MkV model is one of the best-selling hatchbacks in the UK. But in a measure of how fussy…
Skip to HeaderSkip to Content