Does VW's new Golf Saloon make sense for family buyers? In its first test we pitch it against Skoda's Octavia hatch and the Peugeot 508 to find out 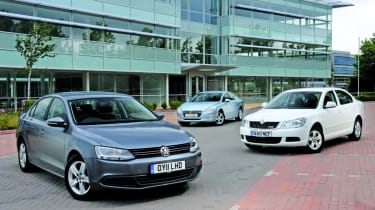 We love hatchbacks in the UK, so it’s easy to overlook the Volkswagen Jetta. The saloon has always been a bit-part player in the family car market, yet that could all be about to change.

Bosses claims there’s more to the all-new sixth-generation model than meets the eye, but is it simply a Golf with a boot or a genuine junior Passat? It clearly has compact executive ambitions, as the latest model is bigger and sharper looking than before. Yet its longer wheelbase also promises family friendly proportions inside.

So is the Jetta going to appear on the radar of private and business buyers? To find out, we’ve assembled a pair of tough rivals. First up is the Skoda Octavia. The hatchback shares many components with the VW, provides loads of space for your money and, in GreenLine II guise, undercuts the CO2 emissions of our Jetta 1.6 TDI BlueMotion Technology test car.

If saloons are your thing, the new Peugeot 508 demands serious attention. It comes with a high-quality cabin, and the e-HDi model is designed to tempt business users with its promise of low emissions.

Saloons have always taken a back seat to their hatch cousins in the UK, so is the new Jetta about to start a revolution? Probably not – but don’t let that put you off Volkswagen’s four-door. Not only does it look the part, but the newcomer has a bigger boot and more rear legroom than the class-leading Golf hatch. The bad news for VW is that family buyers can find all this and more elsewhere – and for less money. The Skoda Octavia takes the honours here as it’s economical, nearly as big inside and ultimately has a more flexible boot. The fact it undercuts the VW by £1,655 only underlines its superiority.

The good news for the Jetta is that it fits the bill as a junior compact exec, where its classy looks, capable dynamics and premium appeal come to the fore. In its match-up with the Peugeot 508, the truth emerges. It’s nearly as large as its Passat stablemate, arguably looks better, is cheaper to buy and is more engaging to drive. Despite its less luxurious cabin, it’s good enough to make us question the wisdom of buying its bigger brother.