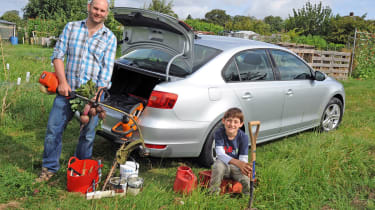 You can really get to know a car when you take a couple of weeks off work. But I didn’t subject our Volkswagen Jetta to a punishing Continental road trip – instead, my two weeks at home in London during the Olympics threw up a different set of challenges for the classy saloon.

Practicality was key for me on my vacation. With an overgrown allotment to deal with, some planned home improvements and numerous visitors to stay, there were more trips to the supermarket and DIY stores than the beach. Happily, the Jetta’s boot coped with virtually anything we could throw in it.

A simple cargo net made transporting bottles (or in my case tins of paint) a risk-free procedure, while on the occasions I needed to head down to my allotment to chop back the jungle of weeds, the boot swallowed my petrol strimmer with space to spare. Plus, the ski hatch enabled me to easily slide the longer items that home improvements sometimes require into the cabin without having to fold down the 60:40 split rear seats.

In fact, the Jetta’s big boot has only been beaten once, when I needed to collect a small sideboard bought on eBay. There was more than enough room in the VW, but the narrow opening of the saloon tailgate meant the unit wouldn’t fit in, so we had to resort to my father-in-law’s Ford Mondeo estate.

The Jetta hasn’t spent all its time fetching and carrying, though. Due to Olympic traffic restrictions, we headed away from the capital for our days out. No matter who was in the back, everyone commented on the huge amount of space, while the air vents at the rear of the centre console kept passengers cool in the recent hot spell.

So what about the car’s downsides? Well, after I complained about rear visibility in the rain in my previous report, a friendly Auto Express reader E-mailed and suggested applying RainX to the glass. This has helped, although the torrential rain seems to have abated for the time being.

The only other problem with the Jetta is its reputation in the UK. The name just doesn’t appear to excite people I have spoken to. This is odd, because I know the cars are popular in the US and are seen as quite ‘cool’ for college kids to drive. It’s time to bring some of that image over here, because if ever a car deserved a classic VW ad campaign, it’s the Jetta.

“I’ve never understood who the Jetta is aimed at. In the UK, family buyers prefer versatile hatches; saloons only sell if they have an upmarket badge.”James Disdale, Road test editor

“The more you drive a Jetta, the more its qualities shine. I planned to buy a Skoda Yeti, but this is more spacious and better from behind the wheel.”Ajit Matthew, via www.autoexpress.co.uk