Our man has been spending hours behind the wheel of the Volkswagen Jetta – and he loves it... 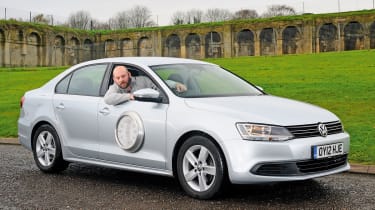 It’s fair to say I don’t get out much. As art director of Britain’s busiest car mag, much of my time is spent behind a desk, rather than behind a wheel. Lately, though, I’ve put in some serious hours on the road with our Volkswagen Jetta for company. I’ve already praised the fantastic practicality of the huge 510-litre boot and better-than-expected 47.1mpg (achieved in mainly stop-start city traffic), so it’s been great to get the Jetta out on the open road to see what it can do.

A series of long trips from south London to the north of England has helped rack up more than 2,000 miles in a couple of months. The first thing to say is how comfortable the Jetta is to sit in. It will never be a particularly exhilarating car to drive around country lanes, but once on the motorway it eats up the miles.

In fact, it was only my family’s calls for food or coffee breaks that forced me to pull over. We certainly never needed to stop for fuel.

As long as the car was full before we set off, we could travel to Leeds and back to London with plenty still left in the tank. Fuel economy is currently a respectable 48.7mpg, although it peaked at 52.8mpg on the motorway runs.

One unfortunate result of all those motorway miles was a tiny stone chip in the windscreen. A hefty excess on our company insurance meant I had to fork out £88.80 for Autoglass to fix the damage – on most private car policies, this service is free of charge.

So with comfort, economy and practicality ticked off, what’s not to like? Well, I’ve already highlighted the poor visibility through the steeply raked back window. The lack of a rear wiper means rain drops obscure what’s behind you. A couple of coats of RainX helped disperse the water at motorway speeds, but unfortunately the Volkswagen is more used to travelling at an urban crawl, which simply isn’t fast enough to clear the screen.

This is a genuine problem in a crowded city such as London. With motorbikes and cyclists swarming around you, it’s essential to have excellent visibility. Winter grime and ice have only made the problem worse.

On the plus side, the sat-nav has been very helpful in guiding me through unfamiliar cities. The points of interest facility was especially useful in locating our hotel.

I also found driving the VW back to London at night very satisfying. With cruise control on and cheesy eighties music to complement the wraparound dash’s slightly retro red lighting, the Jetta’s feel-good factor was hard to ignore.

“The more time you spend behind the wheel of the composed, comfortable and refined Volkswagen Jetta, the more you realise how much you like it. Even its understated looks are beginning to grow on me.”Owen Mildenhall, Senior road tester

“Yes it’s a little bit on the bland side, but the Jetta’s an unpretentious, no-nonsense kind of car. It’s also beautifully engineered – and for me, that’s enough to make it the best car in its class.”JTravolta77, via www.autoexpress.co.uk