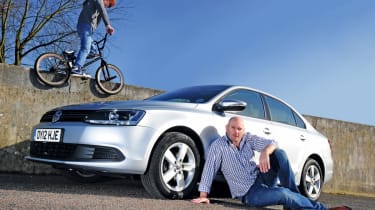 If the VW Jetta has one problem, it’s that it’s always lived in the shadow of the Golf hatchback. Like a popular, successful older sibling, the class-leading Golf always seems to steal the limelight.

However, this latest Jetta has proved it’s no longer willing to play second fiddle, and makes just as much sense as a practical and desirable family car.

In fact, after nine months behind the wheel of the versatile Jetta, I can confirm that it is much more than simply ‘a Golf with a boot’.

The relatively radical 2011 overhaul gave the Jetta a heavily revised Golf platform, which delivered a much more spacious interior and a vast load area. On top of that, the clean-cut saloon styling gave the car the upmarket appeal of a more expensive compact executive model.

Some of my colleagues in the office say it’s a little bland, but for me the VW’s clean lines look classic and understated. It’s not as distinctive as a BMW 3 Series, but I think it looks more upmarket than the multitude of Golfs that you see everywhere.

Inside, the Jetta impresses with an exceptionally comfortable driving position, accommodating my six-foot-one-inch frame without any of the aches and pains that even short distances in other cars can bring on.

As a result, it is ideal for cruising along motorways on my frequent 600-mile round trips to the north of England. Elsewhere, the logically designed dashboard is simple to follow, while the rest of the interior is beautifully built and impressively refined. It has also stood up well to family life – although a splash of upholstery cleaner was needed to remove a chocolate stain from the rear bench.

Ordinarily, I’d say it would be difficult to argue that a saloon could be more practical than a hatch, but the Jetta is the exception.

Sure, you can’t cram a washing machine or chest of drawers in the back of the Jetta, but the vast 510-litre boot swallows everything else. During the Christmas break last year it easily accommodated presents, food and suitcases, plus my son’s new BMX bike. I would never have managed that in the Ford Focus hatchback that I ran previously.

There are issues with such a big load area, though. For instance, it’s so long that retrieving items from the back of the boot is a real stretch. That’s about it for niggles, however.

Apart from the need to top up the engine coolant after the warning light came on, the VW hasn’t missed a beat.

Now that the VW has left our fleet, I’m seeing more examples on the road, which must mean that car buyers have finally discovered the four-door saloon’s talents. And on the basis of my time behind the wheel, the Jetta fully deserves to be the centre of attention for a change.

“The Jetta is good, but the new Mk7 Golf has moved the class on again. It’s still not as big inside as the saloon, but it’s more refined and efficient.”Paul Bond, road tester

“The £20k price tag of this “bland” car brings it awfully close to a BMW 3 Series, which is a far better car in almost every respect.”Fadyady, via www.autoexpress.co.uk