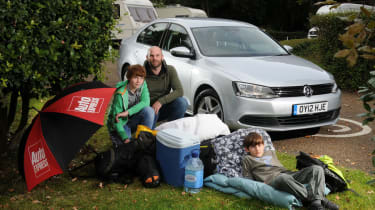 The Volkswagen Jetta was recently crowned Tow Car Of The Year for the second year in a row. While the Jetta 2.0 TDI DSG Sport won that test, our long-term 1.6 TDI SE proved equally useful transporting the Wilson boys to a ‘lads and dads’ camping weekend.

We weren’t towing a house on wheels, but the combined weight of our four-man tent, air beds, cool box, food and the odd beer probably equalled a small caravan’s. And the Jetta’s massive boot unsurprisingly took the lot, even without any careful packing. In fact, we had room to spare, so we stuffed in double duvets, extra pillows and blankets to make the camping experience a lot more comfortable.

The Jetta’s abilities didn’t end there. The boys had masses of legroom in the rear seats, and the glovebox iPod connector meant the hours sat in motorway traffic were whiled away listening to our favourite tunes.

Once at the campsite, it was interesting to see other dads turn up in cars packed with gear. A comparison with our neighbours’ cars, a Ford C-MAX and Peugeot 307 SW, showed that our Jetta had coped well with its cargo.

We had to wait until the tent was up and the boot half-empty again to do a burger and beer run, but it was no problem, as the sat-nav’s points of interest function directed us to the nearest supermarket.

While the navigation works well, the row of blank buttons on the centre console serves as a reminder of how little kit the Jetta has: the most noticeable omission is parking sensors. The SEAT Alhambra on our fleet has a near-identical sat-nav screen, yet it was a pleasant surprise to have a built-in camera help with reversing. It’s certainly something I’d have chosen for the Jetta. With limited rear visibility and that long rear overhang, it’s worth the £450.

The only other downside to the Jetta is its styling. Many people have commented on how bland it is, but the simple, chiseled front end has grown on me, as it suits the car’s practical, no-nonsense character well.

“I’ve got a soft spot for the Jetta, as my dad had a Jetta GTI when I was younger. Maybe VW needs to make a modern GTI to boost this car’s image.”Dean Gibson, Deputy road test editor

“The Jetta is more practical than the Golf in most real- world conditions. With the back seats down, it’ll take a single mattress inside.”Petezrh, via www.autoexpress.co.uk