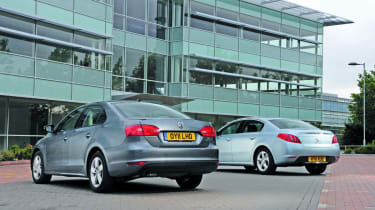 The battle for car park kudos is no longer fought exclusively on badge appeal. Our emissions-based tax regime makes choosing your company car a delicate balance between maximising kerb appeal and minimising costs. The new Jetta has a head start here, as Volkswagen has blazed a green trail with its BlueMotion models.

But the boffins at Peugeot are fast learners. The new 508 is tasked with taking a greater share of the company market, and this is the model to do it. Our 1.6 e-HDi mixes a power output of 112bhp with claimed economy of 64.2mpg; the less powerful VW should be able to return 67.3mpg. Both cars record emissions of 109g/km, so the winner here won’t be decided purely on the balance sheet.

And the Jetta gets off to a stronger start, on account of its more attractive styling. The Peugeot is fussier than its German competitor, especially at the rear, where it looks heavy. The 508 does feature the odd neat design touch, though, including the external boot release button, which is hidden in the ‘0’ of the badge.

Inside, the roles are reversed. Traditionally, VW cabins set the benchmark, but in this comparison, it’s the Peugeot that provides the greater feel-good factor. High-quality switchgear and decent materials combine with a logical layout to give the 508 the edge in this category.

The Jetta uses predominantly Golf-based architecture. It’s a model of simplicity and clarity, but lacks its rival’s flourish. And we spotted a few chinks in VW’s armour – a messy join between two prominent pieces of trim on each of the front door panels caught our eye. It’s not something we expect from the firm. There’s nothing to choose between our Jetta SE and 508 Active when it comes to spec, as both feature six airbags, air-con, cruise control and a multifunction steering wheel as standard.

However, in terms of space, there’s a bigger difference. Rear passengers will really notice the extra legroom in the Jetta. Despite measuring 148mm shorter than the 508, it provides a far more spacious back seat, with executive car standards of knee room. This advantage extends to the boot. Its 510-litre load area trumps the Peugeot’s 473-litre capacity. A quick glance is enough to confirm this disparity, as the Peugeot’s shallower space is obvious to the naked eye, and more likely to pose problems when carrying bulky objects.

Getting comfortable behind the wheel is easier in the VW, thanks to its lower-slung driving position – you feel as though you’re perched upon the Peugeot, rather than sat snugly inside it. Both cars feature stepped backrest adjusters, instead of more precise rotary controls.

What’s more, over-the-shoulder visibility in the 508 is hampered by its thick B-pillar. The other key difference between our two contenders is obvious from the centre console. In the Volkswagen, there’s an ordinary five-speed gearlever, with a light and positive action. Unfortunately, the 508 e-HDi is available only with the maker’s EGC gearbox.

This goes some way to explaining the Peugeot’s higher price (it costs an extra £1,220), but it isn’t the finished article. The automated manual shift takes control of the clutch and gear selection, and can be used in manual mode or as a conventional auto. You can change gears with a tactile alloy-topped gearlever on the centre console, or paddles attached to the steering column. We ignored the nasty plastic shifters behind the wheel rim, in favour of the spring-loaded action of the central lever.

It is intuitively configured to shift down when you push it forwards, and up when you tug it backwards. However, you need to lift off the throttle completely to achieve a smooth shift, otherwise the ponderous transmission fails to smooth out the break in acceleration – with predictably jerky results. It’s even harder to drive smoothly in automatic mode, so the system is badly flawed.

The rest of the 508 experience is more polished. Its stop-start system works incredibly quickly and gently, and the 1.6-litre engine delivers decent pace. High-speed refinement is also impressive, but this throws the car’s shortcomings into sharper focus, as the suspension fidgets on all but the smoothest surfaces, and tyre noise on concrete roads is extremely loud.

Step from the 508 into the Jetta and the differences are stark. The VW’s less powerful 1.6-litre unit feels punchier (even though our test figures confirm this isn’t the case), there’s more grip in corners and better composure at higher speeds. The weighty and communicative steering also makes it an engaging and confidence-inspiring choice, while the suspension copes with bumps and motorway expansion joints with greater ease.

Factor in impressive fuel returns of nearly 50mpg, and the Jetta is a tempting proposition.