Both the Skoda and VW share the same engine, but is the saloon or the hatch the wiser buy here? 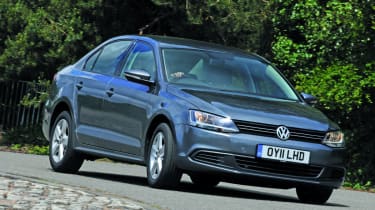 Is it time for the Jetta to become a friend of the family? With a larger cabin than ever and a big boot the VW makes plenty of sense, but the Skoda Octavia will be no pushover in the race for honours here.

The latter follows the Czech firm’s tried-and-tested approach of offering cabin space to rival cars from the class above at affordable prices. This GreenLine II version is powered by the same 1.6-litre TDI engine as our Jetta and, with related underpinnings, the pair have plenty in common.

The VW is the longer of the two. However, thanks to its lengthy wheelbase, it is well proportioned and has the kind of upmarket edge that was missing from its predecessors. To our eyes, it’s more like a miniature Audi A4 than a Golf with a boot.

In contrast, the Skoda is looking dated and lacks the definition of the Jetta’s sharp shoulder line and solid wheelarches. Parked alongside the VW, the Octavia appears a touch bloated. Both models feature colour-coded door mirrors and bumpers, and there’s nothing to split them when it comes to shut lines and perceived quality on the outside.

That theme continues inside, although there are some key differences. The most obvious is at the rear, where the four-door Jetta trails the Octavia hatch for outright versatility. In terms of pure space, there’s not much in it. The Jetta’s large rump hides a 510-litre boot (a useful 160 litres bigger than a Golf’s), but the narrow opening is what sets it apart here.

In SE trim you get 60:40 split-folding rear seats, and with these down, the maximum load length is 20cm greater than the Octavia’s. However, ultimate functionality is limited by the 50cm height restriction between rear screen and boot floor.

Clearly this isn’t an issue in the Skoda, as its vast tailgate provides unhindered access to the 585-litre load area. Fold the seats and you get a huge 1,350-litre capacity to play with.

Sit in the cabin, though, and the advantage swings back to the Jetta. Previous versions of the saloon shared the Golf’s wheelbase, but the latest car has an extra 76mm between the axles, meaning rear legroom is excellent.

In the Skoda, your knees are a couple of inches closer to the front seatbacks than in the VW. Up front, both cars have a similarly ergonomic and easy-to-live-with dash layout. They share much of their switchgear and this, allied to the fact they both provide a wide range of seat adjustment, means they feel very similar from behind the wheel.

There’s barely any difference in build quality, but close examination reveals a few issues with the fit and finish of the Mexican-built Jetta. For instance, the trim joins on the door panels lack the precision we’ve come to expect from the brand, and you don’t get the same flock-lined door bins that feature on the Golf.

On the road, it will feel reassuringly familiar to anyone who drives VW’s current hatch. Its linear steering, plentiful grip and tidy body control deliver the same handling composure as its big-selling stablemate.

Although the entry-level 1.6 TDI BlueMotion Technology engine clatters a little at low revs, it improves on the move and refinement at speed is good. Stop-start and brake regeneration help deliver fuel-sipping thirst of only 49.7mpg and a CO2 output of only 109g/km.

The Octavia uses the same stop-start unit, but adds to the mix an aero-optimised body and 15mm lower ride height. As a result, it trumps the Jetta on paper, dipping below the magic 100g/km mark.

This is impressive when you consider how closely matched the cars are in terms of performance and refinement – the Skoda was actually faster than the VW in our sprint from 0-60mph.

The Octavia is good to drive, too. There is a fraction more body roll in corners, but grip levels are consistent and all the controls are well weighted. Ride comfort and refinement are also closely contested, so there’s nothing to choose between our duo as long-haul companions. A higher equipment count gives the Jetta the edge in this respect.

To compensate, the Skoda is £1,655 cheaper than its rival, although it managed only 43.2mpg during our test, so picking a winner here isn’t going to be easy.