If you want more thrills than the TDI version can offer, the TSI is the pick of the Jetta range. 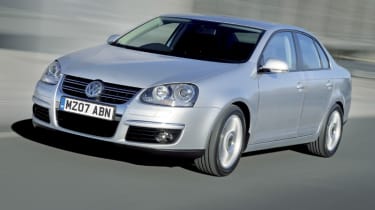 Few engines introduce such groundbreaking technology as VW's TSI powerplant. We soon fell for its gutsy performance in the Golf, and it makes just as much sense in the Jetta. Hot hatch pace and company car-friendly CO2 emissions make a strong case in the saloon line-up. It can't quite match the drama of the Golf GT Sport, but if you want more thrills than the TDI version can offer, the TSI is the pick of the Jetta range.

Have you noticed that diesel is getting more expensive? Although oil-burners are efficient, the gap between petrol and diesel prices has widened so much, you need to be covering serious distances for the black pump to reduce your motoring costs.

Volkswagen's groundbreaking new 1.4-litre TSI petrol powerplant aims to solve the problem. Featuring both a supercharger and a turbo, what the unit lacks in size, it more than makes up for with performance.

We have already been impressed by the technology in the Golf hatchback, where the economical unit is a real giant killer. But will it prove as effective in a larger model?

The Jetta has a far more grown-up character than the hatchback, and as soon as you start driving the TSI, it's obvious there's no ordinary engine under the bonnet. Every press of the throttle brings an impressive burst of acceleration, much like driving a high-powered TDI diesel.

By combining the low-down torque of a supercharger with the high-rev thrust of a turbo, the 168bhp TSI manages to maintain gutsy performance throughout the rev range. A 0-62mph time of 8.3 seconds is amazing, especially when you consider the engine's tiny 1.4-litre capacity.

And given its proportions, the Jetta is still an agile car. The lightweight engine up front helps it to turn sharply into bends and the precise controls allow the driver to stay firmly in touch with the road. Although not as sharp to drive as the Golf, the Jetta's chassis is a good match for the TSI engine. But the unit is not without its faults. At low speeds, the power delivery lacks smoothness as the various under-bonnet systems stutter and sort themselves out. It's a minor irritation that is soon forgiven when you see how efficient the motor is.

We easily matched VW's official economy of 38.7mph, while the car's emissions are also reasonably clean, with a CO2 output of 174g/km undercutting the Golf GTI by 18g/km.

What the Jetta TSI lacks is a sporty feel to go with its eager engine. While the hi-tech motor is available in sharp GT Sport trim for the Golf, the Jetta comes only in Sport guise.

Without any sort of bodykit, the VW's sombre lines are disappointing. It's a similar story inside. The Golf GT Sport gets a boost gauge that helps you to understand what's going on under the bonnet, but the Jetta's dashboard is standard.

At £18,092, the TSI Sport is £930 less than the Golf GT Sport, but a mere £80 cheaper than the Jetta TDI. However, it's a great all-rounder with petrol refinement and pace, combined with impressive economy. It looks as if TSI technology is here to stay.