The new VW Jetta joins our fleet, but will it be as easy to live with as a hatch for our family man? 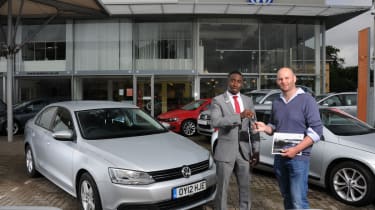 So what is the new Volkswagen Jetta for? Is it a Golf with a boot bolted on the back? A smaller Passat? Or a cut-price alternative to compact executive models such as the BMW 3 Series and Audi A4?

To be honest, as a hardened hatchback driver, my main concern when I collected the keys from Lookers VW Morden, Surrey, was whether the saloon would be as family-friendly as the five-door Ford Focus it was replacing.

Yet as I was shown around the car by sales executive Daniel Johnson, it quickly became clear that space wasn’t going to be a problem. Because the Jetta platform has been designed from scratch rather than based on a Golf, the car is 90cm longer than its hatchback brother – which means there are limousine levels of room for my two rapidly growing children. Plus, the kids benefit from deep door bins that are ideal for games, books and phones.

The boot has a massive 510-litre capacity – that’s a whopping 194 litres more than in the Focus and 160 litres bigger than the Golf’s load bay. Daniel also showed me how to fold the 60:40-split back seats, simply by popping the hidden lever inside the boot. Even with the rear bench in place, the vast area would swallow a couple of large suitcases with ease, and has already made light work of a load of granite floor tiles I needed for some home improvements. Obviously, it doesn’t offer the full versatility of a hatchback, but how often do you really need to move furniture about?

And anyway, the huge potential savings the Jetta promises in running costs would cover the price of hiring a van. VW claims our 1.6 TDI BlueMotion Technology model will return 67mpg economy, thanks to its stop-start system. I’ve only achieved 42.4mpg so far, but this isn’t bad when you consider that the car has spent most of its life crawling along London’s congested road network.

And sitting in jams hasn’t been too much of a chore as the Jetta is so comfortable and relaxing at low speed, while the dash is simply designed and perfectly laid out. Light controls and excellent visibility also make the VW easier to drive than most of the family cars I’ve been in. Yet out of town, the torquey diesel engine and composed dynamics mean it’s surprising fun, too.

The Jetta doesn’t compare that well with my old Focus for options and technology, though. The sat-nav is simple to use, but is a pricey £1,755 option. And while Bluetooth is standard on our SE, pairing my phone with the system was more complicated than in the Ford – I needed a quick lesson from the VW sales staff.

Our model doesn’t have reversing sensors, and as the four-door is quite long, parking can be a journey into the unknown. It doesn’t help that I’ve got so used to having a rear wiper on the hatches I’ve been driving; without one on the Jetta, visibility in the rain has been poor.

VW sells loads of these Mexican-built saloons in the States, where the Jetta is much more popular than the Golf – its traditional four-door styling goes down a treat in the conservative US market. Yet over here, the sober shape divides opinion – the Auto Express office is split down the middle on its looks.

While some of my colleagues argue that the conservative lines give the Jetta a classic compact executive look for less, others suggest it would make a perfect getaway car, as witnesses would struggle to pick it out in a crowd. So it’s clear the Jetta has a bit of an image problem – and I’m still not entirely sure where it fits into the packed new car market. However, over the next 12 months I’m hoping to find out exactly what makes this spacious and refined family saloon tick.