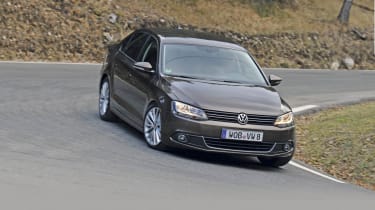 The fact that Brits love the hatchback means the Jetta will always play second fiddle to the Golf in the UK. However, the latest version is bigger, better-looking and a far superior stand-alone model than it was before. Its lengthened wheelbase delivers excellent rear legroom and gives more grown-up proportions. With unique panels and styling that’s further removed from the Golf’s, the Jetta is every inch the mini Passat. Composed in the corners and refined at speed, it’s good to drive and comfortable. And in 1.6-litre TDI BlueMotion Technology trim, it’s clean and cheap to run as well.

Is it time for this saloon to  ‘Jetta-son’ its Golf-with-a-boot image? Our love of the hatch means that the Jetta is often overlooked  – but VW claims the latest, sixth- generation variant bridges the gap between the Golf and Passat better than ever before, creating an attractive stand-alone model.
Do we agree? Well, it is bigger and better looking, with styling which bears less resemblance to the Golf’s. In fact, visually the Jetta is more akin to the Passat. It’s 90mm longer than the car it replaces, and the new proportions help give the smallest saloon in the VW range a more grown-up look. The familiar grille and front-end treatment are complemented by a strong shoulder line and neat rear, all of which give the Jetta an upmarket edge that was missing from previous generations.

Video: watch CarBuyer's video review of the VW Jetta
[[{"type":"media","view_mode":"content_narrow","fid":"68671","attributes":{"alt":"","class":"media-image"}}]]
Every panel is new and, crucially, different from the Golf’s, and the wheelbase is stretched by 73mm. This means better back legroom;  in fact, rear passengers are as well catered for as they are in the class above. On top of that, the 510-litre boot is huge, and 60/40 split-fold seats aid functionality. As you’d expect inside, quality is hard to fault and the cabin boasts the same no-nonsense, easy-to-live-with  layout as the Golf, giving a great driving position and logical dash.
It’s this combination of space, quality and style that VW hopes will maintain the Jetta’s popularity in North America. Annual US sales pass the 110,000 mark – this vastly outnumbers the 15,000 Golfs bought there each year – so it’s easy to see which customers the model has to appeal to.
However, Volkswagen is also keen to ensure the new Jetta is well suited to European tastes. While all variants are produced at the firm’s plant in Puebla, Mexico, our versions get multi-link rear suspension, electric power-steering and subtle styling changes. This means the Euro-spec Jetta is considerably  different to the US variant launched in New York last autumn.
With the first UK deliveries due in May, the firm’s usual mix of TSI and TDI engines is available. Petrol options will be the 120bhp and 158bhp 1.4-litre TSI, while initial diesel choices will be the 104bhp 1.6-litre and 138bhp 2.0 TDI.
It’s the entry-level 1.6-litre that will be the biggest seller – it is  predicted to account for nearly one-third of sales. With only 104bhp, performance is leisurely and there’s some clatter under load, but refinement at speed is decent.
The five-speed gearbox is  available exclusively in BlueMotion Technology guise, and its long ratios take some getting used to. However, with standard stop-start, 67mpg economy and 109g/km CO2 emissions, the Jetta will appeal to company and private buyers alike.
Nicely weighted, linear steering combined with decent body control and consistent grip levels mean the car shares the composure of its Golf cousin in the corners. Its stretched wheelbase hasn’t ruined the ride, either; in fact, on the admittedly smooth roads of our French drive route, the suspension coped well and easily soaked up imperfections. If you’re looking for a good small family car with a boot, the Jetta shouldn’t be ignored.
Share this on TwitterShare this on FacebookEmail