There is no doubting the popularity of VW's Golf - the latest MkV model is one of the best-selling hatchbacks in the UK. But in a measure of how fussy British drivers can be, little needs to be done to the car's shape to see it turn from champ to chump. 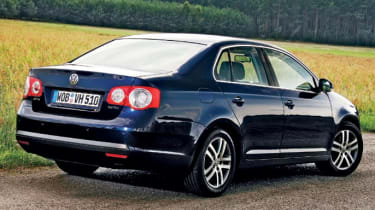 Golf-based saloons have never sold well in the UK - but this Jetta has more appeal than its predecessors. With distinctive styling, a big boot and more standard kit, the four-door offers something different from the hatchback. But the Jetta is unlikely to change perceptions of small saloons or hold its value as well, while the higher price also counts against it.

There is no doubting the popularity of VW's Golf - the latest MkV model is one of the best-selling hatchbacks in the UK. But in a measure of how fussy British drivers can be, little needs to be done to the car's shape to see it turn from champ to chump.

Take the addition of a boot as an example - something VW has done to every Golf since the original's launch in the Seventies. Although the resulting car's name may have changed - from Jetta to Vento, then Bora - the sales story in the UK has not. Booted Golfs have never accounted for more than around 20 per cent of cars sold.

However, VW claims the new Jetta, driven in Europe here for the first time, is a different prospect. Positioned as a more upmarket machine than its predecessor, it goes on sale in February next year with compact executive saloons such as Volvo's S40 in its sights.

From the outside, VW has tried hard to distance the Jetta from the Golf - by making it look more like a shrunken Passat. At the front a chrome grille dominates, while there are further similarities to the large saloon at the rear, with distinctive tail-lights that are lit by bright, fast-reacting LEDs. In profile, there is more than a nod to its bigger brother, too, although because the rear overhang is long, the Jetta can look awkward from some angles.

Still, that means a healthy amount of luggage space; there is a 527-litre capacity, which is 72 litres more than in the Bora. That makes the newcomer bigger than the Ford Focus saloon and puts it on a par with cars such as the Honda Accord. A split-folding rear bench further enhances practicality.

Because the Jetta is longer, wider and taller than the Bora, it has more room. However, since it is identical to the Golf underneath, there is no extra cabin space compared to the hatch. In fact, there is a little less headroom due to the sloping roofline, but even then, passengers over six feet tall will still be comfortable.

From launch, buyers get a choice of 113bhp 1.6 and 138bhp 2.0-litre FSI petrol engines, plus 103bhp 1.9 and 138bhp 2.0-litre turbodiesels, all shared with the Golf. Predictably, the top-seller is expected to be the 2.0-litre oil-burner, and rightly so. Refined and punchy, it is far better than the less powerful 1.9 TDI. And even though the petrol units are smoother, the diesel's 51mpg combined economy means it will be the choice for most buyers. On the move, the Jetta feels identical to the Golf, with a comfortable ride, accurate steering and excellent noise insulation - although if it is fun handling you are after, buy a Focus or a BMW 3-Series.

With only three trim levels - S, SE and Sport - VW is keeping the range simple, yet all models get air-con, electric windows, a six-speaker CD player, trip computer and alloys as standard, so equipment is generous. Prices have yet to be confirmed, but expect the Jetta to carry a £500 premium over the equivalent Golf. However, that means the 2.0 TDI SE driven here would be nearly as expensive as the identically engined Passat. And that could be the Jetta's biggest problem - it does not quite cut it as an executive pretender, and it may be too expensive for most family buyers.