How many names does it take to change the image of a four-door Golf? Volkswagen hopes the answer is only three. 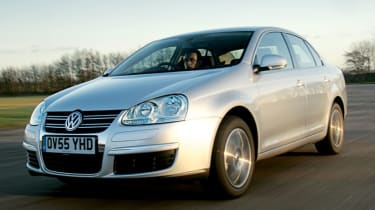 VW says the Jetta is more than just a Golf with a boot, and we can see why. While there is no denying the similarities between the two, the Jetta is better value and offers lots of loadspace. But saloons don't sell in great numbers in the UK, and despite the Jetta's quality, we'd be tempted to stick with the more versatile and better-looking Golf.

How many names does it take to change the image of a four-door Golf? Volkswagen hopes the answer is only three. The firm's compact family saloon has been called the Vento and more recently the Bora, but now bosses have re-introduced a badge that's been extinct in the UK for 16 years. The Jetta is back!

VW enjoyed some success with the Bora, managing to tempt buyers who could not quite stretch to a BMW 3-Series. However, with the Jetta it hopes to break the mould, combining the best features of the Golf in a classy mini-Passat bodystyle. In fact, the rear lights are nearly identical to those fitted to the larger saloon, as is the shape of the tailgate. Only at the front are the Golf origins made obvious.

Inside, the dash is identical to the hatch's, right down to the design of the centre console. As a result, buyers enjoy a fine quality cabin with faultless ergonomics. And as with the Golf, the Jetta also has plenty of cubby spaces.

With many examples destined to cover much of their mileage on the motorway, VW hasn't neglected comfort. There's lots of adjustment in the seats, so it's no problem finding an acceptable driving position.

Rear passengers also enjoy generous legroom, although headroom is a bit tighter than in the Golf due to the sloping roofline. But four six-foot adults could easily travel long distances in the Jetta, and there's enough space for their luggage, too.That's because the boot is the Jetta's trump card. At 527 litres, it's 42 litres bigger than in the Passat.

On the road, our test car's 2.0-litre FSI unit provides a reasonable amount of punch, but isn't the last word in refinement. The engine note is too hard-edged for a car in this class. At least it's reasonably clean and economical, producing only 197g/km of CO2 and returning 34.4mpg.

Under the skin, the Jetta shares most of its mechanical parts with the Golf, so it feels identical to drive. That's no bad thing, with a smooth ride that copes brilliantly with bumpy back roads. The Jetta flows through ruts and pot-holes much better than a Ford Focus would, yet it manages to avoid floating too much over longer undulations.

The steering is precise, if a little numb, while the handling is safe, but not exciting. What has got us confused, though, is the pricing. This Jetta is cheaper than the equivalent Golf, yet has a nearly identical amount of kit. Priced from £14,635, the new line-up is bizarrely being sold as a more upmarket choice! Looks like it really could be time to join the Jetta set.