Is Golf-based saloon still a bridge too far for British buyers? We hit the road in the US to find out. 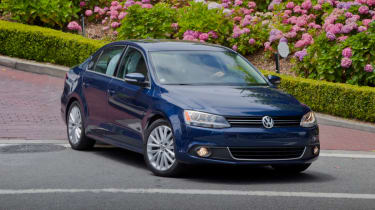 Volkswagen’s decision to give the Jetta its own identity has paid off. The new car looks great and performs well, providing all the quality of a Golf with more rear seat and boot space. With the 2.0-litre TSI engine, it’s capable in town and on motorways, and the DSG box manages performance well. The Jetta is a respectable all-rounder, and if you don’t need the extra practicality that a hatchback offers, it’s well worth a look.

Is this the gateway to increased family car success for Volkswagen? In the past, saloon versions of the Golf have proven more popular outside the UK than in it.

But with the new Jetta, the German firm is keen to secure a big hit on both sides of the Atlantic. So Auto Express headed to San Francisco to see if it can tempt British buyers out of their hatchbacks.

It’s certainly good looking. Inspired by the NCC concept car – revealed at the Detroit Motor Show in January – it doesn’t share a single panel with the Golf, and has a clear and crisp look all of its own. Factor in a classy roofline and upmarket lights, and it looks every inch the baby Passat.

What’s more, the newcomer is 90mm longer than the previous Jetta – 70mm of which is between the wheels. This means 67mm more legroom and an impressive boot capacity of 510 litres – which is 160 litres up on the Golf. So although it doesn’t have the easy loading ability of a hatchback, the saloon is practical for passengers and luggage alike, with six-footers able to sit in the back in comfort.

The cabin will be familiar to Golf owners – it’s a classy environment, with soft-touch plastics and great build quality. Each Jetta benefits from a multimedia display for the stereo and air-conditioning functions, with buyers also having the option of a touchscreen sat-nav system.

Under the skin, European-spec models get a four-link rear suspension set-up. This provides strong agility and a grown-up driving experience, with minimum body roll and a comfortable ride.

Four petrol and two diesel engines will be available from launch next May. Turbocharged TSI petrol engines range from the entry-level 103bhp 1.2-litre to a 1.4-litre offering 121bhp and 158bhp. The top-spec 2.0-litre TSI has 197bhp.

Diesel fans can pick from 103bhp 1.6 and 138bhp 2.0-litre TDI units. BlueMotion versions of the Jetta will offer a choice of 1.2 TSI and 1.6-litre TDI engines, with stop-start and brake energy regeneration helping the 1.6 achieve 67mpg and 109g/km of CO2.

The car we drove was equipped with the 197bhp 2.0-litre TSI engine. Hooked up to VW’s seven-speed DSG twin-clutch transmission, it provides strong, smooth performance, with the 0-62mph sprint taking around seven seconds. Yet it also promises nearly 40mpg combined.

It’s punchy and refined, although we’d go for a diesel, which will offer nearly as much pace with even stronger efficiency. So is the Jetta now a more viable Golf alternative? Well, it looks the part, drives very well and shouldn’t cost too much to run. It’s got more appeal than ever.