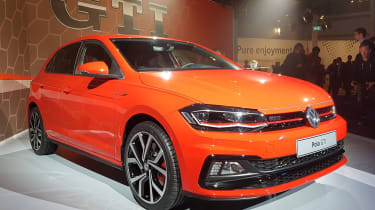 Alongside the reveal of the standard Polo, Volkswagen has also released the first images and details of the hot new Polo GTI. The supermini hot hatch has the upcoming Ford Fiesta ST in its sights with a new and more powerful engine, and is expected to go on sale slightly later than the standard version.

The 2017 Polo GTI continues the model’s trend for ‘upsizing’ its powertrain. The previous car went from 1.4 litres to 1.8 litres in its lifecycle, and now the new GTI sees engine capacity increase again to 2.0 litres. The new direct-injection turbocharged motor produces 197bhp, an increase of eight bhp over the previous car. By contrast, the new Fiesta ST produces an identical power figure but from a 1.5-litre three-cylinder turbo unit. 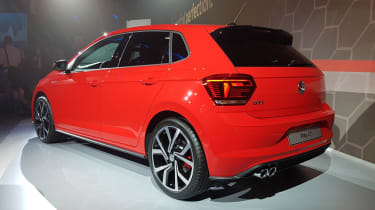 VW hasn’t yet revealed performance details, but it’s likely the new car will gazump the old model’s 0-62mph time of 6.7 seconds and 147mph top speed. As before, it’ll be offered with both a six speed manual gearbox and a seven-speed DSG automatic. Two suspension options are offered: the standard ‘sport chassis’ and the optional Sport Select chassis with adjustable dampers.

Like the standard car, the new Polo GTI has a more mature look than before. Subtlety, rather than lairy wings and skirts, is the name of the game here. At the front, a larger bumper features a small lip spoiler, a honeycomb air intake and front foglights, while a trademark GTI feature comes in the form of the red strip that runs through both headlights and across the grille. 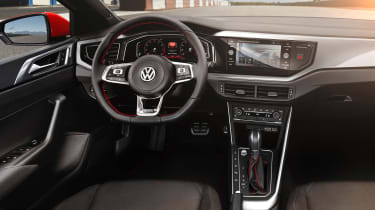 At the rear, a gloss black roof spoiler, dual tailpipes and a diffuser also features, along with LED tail-lights and GTI badging. 17-inch alloys (18-inch items are optional) extended side sills and red brake callipers complete the look.

Inside, the iconic tartan patterned sports seats can still be specced, while a red-stitched sports wheel, black rooflining and a GTI gearknob are also added. Ambient lighting is also standard fitment.

Is 197bhp enough for the new Volkswagen Polo GTI? Let us know below...