Top tyre that narrowly misses out on a second successive win 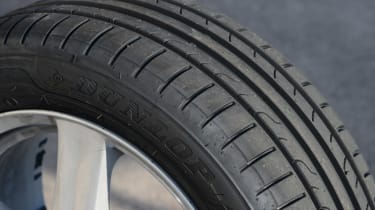 Top tyre that narrowly misses out on a second successive win

Three years ago, the BluResponse was our winner and this time it finishes an impressive second – not bad for a tyre that’s been around since 2013. Its success was built in very much the same way, with top performances in the dry.

It won the braking test again and came third on the handling track. While it lacks our winner’s sharpness, it felt agile with a good balance and was just a couple of tenths slower.

As we have seen in recent tests, Goodyear and Dunlop tyres have proven among the most frugal, and it was the same again here. The BluResponse was second in the fuel economy measure, matching its 2014 result, although it was beaten by the P7 Blue this time. Others have moved the aquaplaning standard in the past three years, but results close to the best kept this tyre in the hunt.

Its chances of another overall win ebbed away in our other wet tests, though. On the handling track, the Dunlop lacked the bite of the Continental and Bridgestone, requiring more lock and patience before you hit the throttle. It saw off most rivals, but trailed the best. Still, a great performing tyre and the one to go for if fuel economy is the primary requirement.