Hopefully Nokian has a new tyre on the way, matching its winter and all-season designs 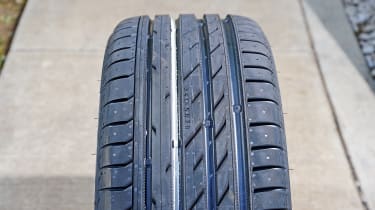 Finnish brand Nokian has long been a top performer in our winter and all-season tyre tests, but it seems its summer line-up is still in need of work. As with others here, the zLine didn’t feature in our last 17-inch tyre test, but it was available; it was launched in 2013.

While tyres are developed throughout their lifecycle, it’s not easy to outperform much newer designs. Unlike Avon, the Nokian achieves some encouraging results; it matches Korean rival Hankook whose tyres are original equipment on models from BMW and Mercedes.

The zLine was strongest at the pumps; it was best of the rest after the amazing Bridgestone. Yet it managed this while retaining decent wet performance – the usual trade-off for a frugal tyre. In wet braking, it was right in the middle of the pack, justifying its A rating.

It was close to the pace setters on the circle and not far behind on the handling track. It lacked the sharpness of the best and required more lock than most rivals. It felt soft, too, although the rear was well controlled. The zLine was less effective in the aquaplaning test, particularly in the lateral measurement.

That soft feeling, a bit like a winter tyre in the dry, carried over to the sweeps and twists of the dry handling track. Again it needed more lock than the best and left the car feeling wallowy through longer sweeps. You have to wait a bit longer to get on the throttle as well.

“Nokian is perhaps better known for its winter tyres, so this isn’t as popular with customers. However, it’s scored well when purchased.”