Japanese producer Toyo makes its winter test debut, although the Snowprox S954 has been around for a couple of years now. 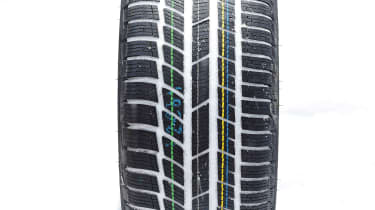 Japanese producer Toyo makes its winter test debut, although the Snowprox S954 has been around for a couple of years now. But in those two years or so rivals have introduced new compounds, so while the Snowprox is considerably better than a summer tyre, it is lacking when compared to newer competitors.

Across all snow tests it is more than 10 per cent behind the leader, and just under five per cent behind the next best. That lack of grip is apparent from behind the wheel. It is closer to the top in the wet, but the lack of gripis still present, with the front the limiting factor. Where it comes alive is in the dry, with decent steering response and impressive grip. Fuel economy is also a concern compared to the best, but then few rivals could match Nokian. The Toyo is by no means a bad tyre, but there are more effective options.

We say: Feels like a previous-generation tyre since the opposition has raised standards for winter rubber

Blackcircles.Com says: At the time of writing, Blackcircles.com doesn’t hold a stock of this tyre, so we’re unable to provide any insight into the tyre’s popularity or performance with our customers.