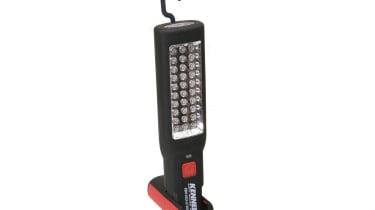 While Draper’s 43080 is a slightly newer version of the 24367 we featured last time, this rather similar Kennedy model appears exactly the same as before. Positioning is catered for by two rear-mounted hooks and magnets, plus a further strong version in the front-to-rear hinged base. But as with the Draper, the beam pattern is very centre heavy with a noticeable drop-off away from the bright centre circle, which means plenty of realignment to get the best of the light on the job. Despite the obvious similarity, it’s also a touch behind the Draper’s light output overall.