Falken has joined Hankook in abandoning an asymmetric tread for its all-season tyre, joining most rivals with a directional pattern. 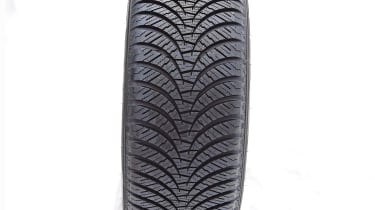 Falken has joined Hankook in abandoning an asymmetric tread for its all-season tyre, joining most rivals with a directional pattern. And it performs in much the same way, with improved dry grip – and enough to edge the battle with the Kinergy and AW-6. But it was the worst of the trio in the Finnish tests, lacking grip on corner entry, and traction at the exit, but with a good balance.

It was best of the three in the aquaplaning tests, but less good in wet handling, where it lacked front grip and traction on lock. Corner entry needed to be slower than its best rivals to maintain line. Like the Hankook it preferred the dry, where it found the traction it lacked elsewhere. Less good is its economy, three per cent off the Continental.

We say: Braking on all surfaces and fuel consumption need work to match best

Blackcircles.com says: This is a fairly new tyre to the market, and we have not received a large number of orders. However, customers who have purchased the tyre have generally left positive reviews.