Audi A5 receives fresh facelift for 2019 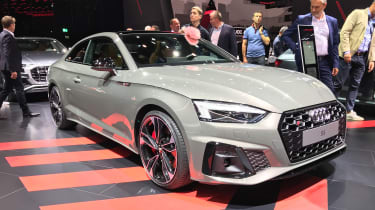 Audi has followed up the facelifted A4 saloon and Avant estate with a freshly redesigned A5, revealed in full at the Frankfurt Motor Show in Coupe, Cabriolet and five-door Sportback guise.

On sale since 2016, the mid-life refresh bestowed on the second-generation A5 is extremely similar to that of the A4. That means a sportier redesign on the outside is joined by new infotainment technology on the inside and new engines.

Visually, the transformation is most evident front on. The A5 receives a new grille, shaped in line with the latest Audi family face and finished in different patterns based on trim level. For instance, sporty S-Line and S5 models receive honeycomb treatment, while elsewhere in the line-up the grille is finished with horizontal slats. 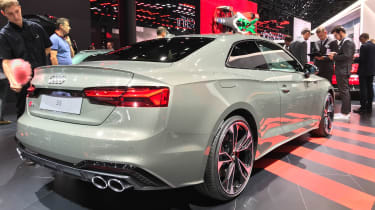 The front bumper morphs into a more aggressive design with larger air intakes cut into the front apron and a new bottom lip. Sitting above the main grille is a horizontal cut, similar to the one on the A4 facelift and the A1. Freshly designed LED headlights - available with optional matrix LED technology - complete the new front end, new taillights appear at the back alongside a freshly designed rear diffuser, and some of the side surfacing changes too.

Inside, the infotainment changes to match that of the A4. That means Audi has removed the rotary know based MMI system in favour of a touchscreen only setup utilising a new 10.1-inch display mounted on the dashboard, running new software. Navigation technology has been updated to the brand’s latest standard, with new online services such as hazard information, on-street parking availability and in certain European cities, traffic light information.

As standard the new A5 is equipped with a Wi-Fi hotspot, while the 12.3-inch Virtual Cockpit digital instrument panel has been updated to Audi’s latest version, and can team up with a head-up display. Elsewhere, the A5 is now capable of over-the-air spec upgrades. Using the MyAudi Smartphone app, owners update their cars to feature MMI Navigation Plus, DAB+ digital radio or the Audi smartphone interface, either short term for a fee or permanently.

The introduction of mild hybrid technology under the bonnet sees the A5’s four-cylinder petrol and diesel powertrain line-up change subtly. Four engine variants now feature 12-volt MHEV technology, consisting of a belt alternator starter connected to the crankshaft. The system recuperates energy and stores this in a small lithium-ion battery, enabling the start-stop system to operate in a larger window and reducing the amount of effort required by the engine while moving at speed, reducing CO2 and improving fuel economy. 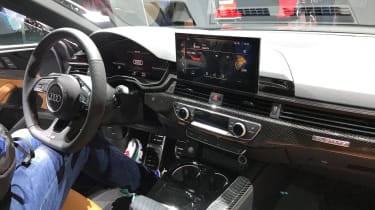 Elsewhere, like the S4 models, the new S5 has been converted to diesel. The new S5 TDI uses a turbocharged 3.0-litre diesel engine with 48-volt mild hybrid assistance, developing 342bhp and 700Nm torque. 0-62mph is claimed in under five seconds, while top speed is electronically limited to 155mph. Drive is sent to a quattro all-wheel-drive system through an eight-speed torque converter automatic gearbox, while the S5 will be offered in just Coupe and Sportback body styles.

UK specifications for the facelifted A5 have not been finalised, but a small price premium over the asking price of the current A5 Coupe should see starting prices rise slightly above £35,000. Cars are anticipated on the road early next year.

What are your thoughts on the new Audi A5 Sportback? Let us know in the comments section below…