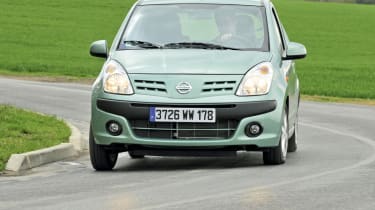 The entry-level version of Nissan’s Pixo city car falls into insurance group 2, which means usefully low premiums. It doesn’t represent the last word in small car technology but you can’t argue with the bottom line where this £7k runabout is concerned.

The Nissan Pixo engine range has only one choice: a 1.0-litre, three-cylinder petrol making only 68bhp. As you'd expect, performance is sedate: 0-62mph takes 13.5 seconds, which isn't a problem in towns and cities, but can turn motorways and dual-carriageways into a wearying struggle.

Everyone will find the Pixo easy to drive, thanks to its light steering and fuss-free controls, but handling isn't its strong suit and there's little or no feedback through the steering wheel. Noise is a bigger problem, though: severe wind and tyre roar can be heard inside at motorway speeds.

is never going to be massively practical, but even by the standards of the class, the Nissan Pixo is extremely disappointing. Its 129-litre boot is one of the smallest of any car on sale in the UK, while a high lip and narrow opening only compound the problem. The back seats do fold down – but not completely flat – and when they're in place, adults will find the rear cabin extremely cramped.