The Nissan Pixo is one of the cheapest cars on the road - unfortunately it feels like it, too 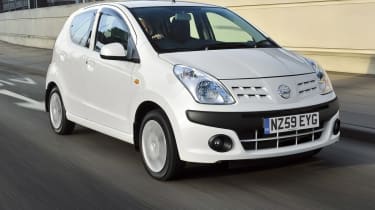 The Nissan Pixo was for several years one of the cheapest cars on sale in the UK. Starting from around £7,000, it offered nothing more than no-frills motoring for a rock-bottom price. But the arrival of the sub-£6,000 Dacia Sandero has really shaken up this end of the car market, so the Pixo no longer looks as good value as it once was. There's nothing about this car that would make you choose it over the Sandero, or other rivals such as the Pixo's sister model – the Suzuki Alto. Exterior styling and interior fit and finish are uninspiring, while the 1.0-litre petrol engine has its work cut out for it with only 68bhp on tap. Crash safety is not class-leading, the cabin is quite tight on space and the boot capacity isn't much better. If you can get a particularly good finance deal and are just looking to do basic A-B town motoring, the Pixo makes sense, but otherwise it loses out to the Sandero in almost every area.

The Nissan Pixo engine range has only one choice: a 1.0-litre, three-cylinder petrol making only 68bhp. As you'd expect, performance is sedate: 0-62mph takes 13.5 seconds, which isn't a problem in towns and cities, but can turn motorways and dual-carriageways into a wearying struggle. Everyone will find the Pixo easy to drive, thanks to its light steering and fuss-free controls, but handling isn't its strong suit and there's little or no feedback through the steering wheel. Noise is a bigger problem, though: severe wind and tyre roar can be heard inside at motorway speeds.

This is the one area where the Pixo puts in a respectable showing. Aside from its low purchase price, it should also be cheap to tax, fuel, service and insure. The 1.0-litre petrol engine will return 60mpg as long as you don't push it hard, and although the Pixo's 103g/km CO2 output places it just above the threshold for free road tax, your annual VED bill won't break the bank. Tax will be slightly higher if you choose the automatic gearbox, which increases the CO2 emissions figure to 122g/km.

The Pixo is a dull but inoffensive-looking model, which will suit city-car buyers who simply want to get motoring for as little money as possible, and don't care about styling. But others who want a bit of visual flair for their budget will be left disappointed. The news is not much better inside, where there's plenty of evidence of the Pixo being built down to the lowest possible price. Drab, scratchy plastics and plain upholstery abound, but on the plus side the interior doesn't feel too brittle, so it should be fairly solid and hard-wearing.

A city car is never going to be massively practical, but even by the standards of the class, the Nissan Pixo is extremely disappointing. Its 129-litre boot is one of the smallest of any car on sale in the UK, while a high lip and narrow opening only compound the problem. The back seats do fold down – but not completely flat – and when they're in place, adults will find the rear cabin extremely cramped. Space is so tight that there's no glovebox at all, and other cabin storage areas are on the small side. So if you buy a Pixo, you'll be travelling light wherever you go.

Basic, tried-and-tested mechanicals mean reliability shouldn't be an issue for the Nissan Pixo – yet crash-test performance is less impressive. The Pixo itself hasn't been tested by Euro NCAP, but its almost-identical sister car the Suzuki Alto has – and was only awarded three out of a possible five stars. The Pixo didn't feature in our Driver Power 2013 satisfaction survey, either, but Nissan overall is a fairly well rated brand, finishing 12th in this year's manufacturer rankings. 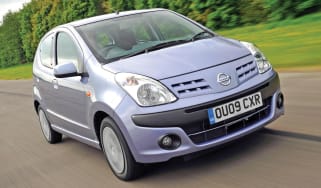 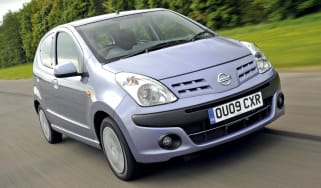 Is firm’s new budget city car on to a winner?
Nissan Pixo 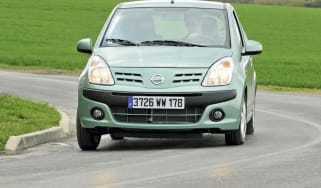 New city car is cheapest model in Nissan's range... Will it be the talk of the town?
Skip to HeaderSkip to Content