The Suzuki Alto is one of the cheapest superminis on sale, but it's also bland and unrefined 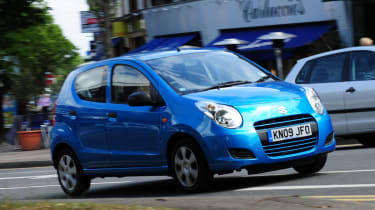 The Suzuki Alto is closely related to the now-discontinued Nissan Pixo and is a rival for the Peugeot 108 and Toyota Aygo. It's fair to say that you won't be treated to many frills - this is a very dated and basic car.

On top of that it only received three stars out of a possible five from Euro NCAP for crash safety and the boot is small – even for the city car class. The only engine choice is a 1.0-litre three-cylinder petrol, but it emits less than 100g/km and promises to return more than 60mpg.

Suzuki only offers the Alto with one engine – a 1.0-litre three-cylinder petrol unit. Like the similar unit in the Skoda Citigo, the 68bhp unit is a smooth and eager performer. Combined with slick five-speed manual gearbox it allows the Suzuki to sprint from 0-62mph in 13.5 seconds.

However, go for the optional four-speed automatic and the Alto needs a leisurely 17.0 seconds for the same test. The Alto performs well in town, where good all-round visibility and a compact footprint make it easy to drive. On the open road, light steering and a wheel at each corner stance deliver agile handling, although grip levels aren’t very high. Unfortunately, there’s too much wind, road and engine noise on the motorway, making the Suzuki Alto a tiring long distance companion.

Few cars are as cheap to run as the Suzuki Alto. Recent tweaks to the 1.0-litre engine have resulted in CO2 emissions tumbling to 99g/km, while fuel economy has been boosted to a claimed 74.3mpg. Even the sluggish four-speed automatic version emits just 118g/km and is capable of more than 60mpg. The Suzuki even boasts reasonably strong residuals, with all versions retaining around 40 percent of their value after three years. Cheap insurance and servicing costs also help to minimize the impact on your wallet.

The Suzuki Alto is a cheap car, so don't expect cutting edge premium design. It’s certainly not as neatly styled as the Skoda Citigo or Toyota Aygo, but at least all versions get body coloured bumpers and tinted glass, while the range-topping SZ4 benefits from 14-inch alloys wheels. The cabin is full of hard and scratchy plastics, and the pop-out side windows are clear evidence of the car’s bargain basement status. Still, it’s robustly screwed together, plus all versions get central locking, electric front windows and a radio/CD player.

Unfortunately, the Suzuki Alto can’t match the surprisingly practical Skoda Citigo for interior space. There are only two seatbelts in the rear, plus head and legroom are limited. The Alto also suffers from cramped 129-litre boot, which is further hobbled by a high loading lip. Still, you can fold the rear bench flat for extra carrying capacity, while SZ4 models get a versatile 50/50 split arrangement. There’s also a decent amount of storage in the interior, including various cup and bottle holders, four door pockets and a useful storage tray located in the dashboard.

City car safety has moved on in recent years, with cars such as the Skoda Citigo bagging an impressive five star Euto NCAP score. Sadly, the Suzuki Alto comes nowhere near matching the Skoda, as it was a awarded a very disappointing three star result. For instance, SZ and SZ3 versions only get two airbags – you have to fork out for the range-topping SZ4 to receive six airbags and stability control. On the plus side, solid build quality, simple mechanicals and a lack of potentially troublesome hi-tech equipment mean the Suzuki Alto should be a trouble-free choice. 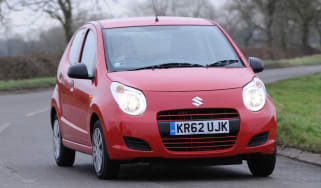 The Suzuki Alto might be one of the cheapest cars to insure in the UK, fitting into insurance group 1, but it's certainly not one of the best.
Visit Suzuki Celerio european specs revealed 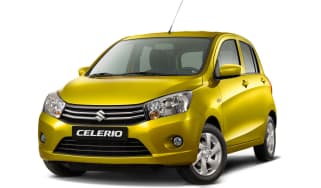 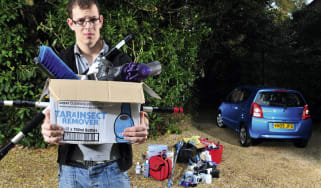 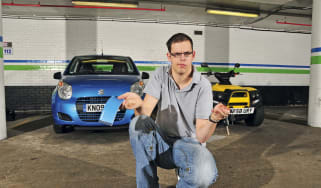 SECOND REPORT: It’s the chequebook challenge – will our man be tempted to swap his commuting city car for a quad bike?
Visit Suzuki Alto: 2,802 miles 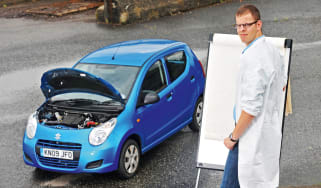 Second report: Mystery noise means it’s back to the drawing board for our city slicker.
Visit Suzuki Alto: 791 miles 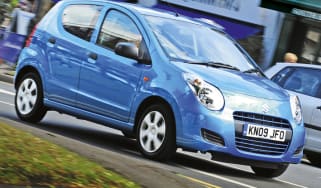 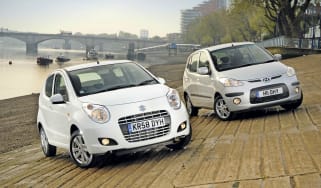 Suzuki’s all-new Alto enters the closely fought city car sector with value for money on its side. Is that enough for it to trump our current class cha…
Visit Suzuki Alto SZ4 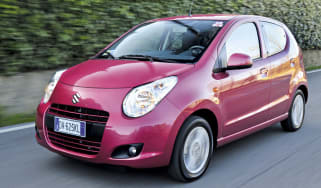 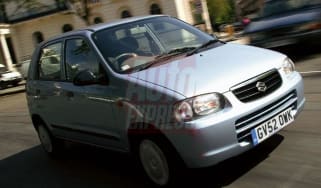 Things are done very differently at the grass-roots level of bargain-basement motoring. Priorities such as style, refinement and brand image go out of…
Skip to HeaderSkip to Content