FIRST REPORT: Characterful 50mpg runabout should prove a big hit in the city 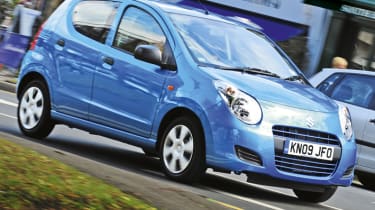 Meet our long-term fleet’s newest recruit. It’s not the most glamorous model in the Auto Express car park, but with its low running costs, cheeky looks and characterful three-cylinder engine, the Suzuki Alto carries plenty of appeal.

This is the latest in a series of models to wear the badge, dating back all the way to 1979 – our Alto is the seventh generation. In that time, every model has stuck to exactly the same template, blending compact dimensions with simple mechanicals and affordable prices.

On its road test debut last month (here), the Alto lost out in a head-to-head shoot-out with our favourite bargain car, the Hyundai i10. Now we aim to find out if it fares any better on a day-to-day basis.

First impressions of our mid-range SZ3 model are positive. Tight dimensions, short overhangs, light steering and decent visibility mean the Suzuki is perfectly suited to city life. It’s attractive, too. Our test car’s blue paintwork stands out, while the gaping grille and large headlights give it a friendly face.

In profile the shape is less distinctive, although the five-door layout brings plenty of practicality. Space in the rear is reasonable by city car standards, with room for a couple of adults. However, with only two rear seatbelts, the Alto is strictly for four people. And the 129-litre boot is pretty small – it will be interesting to see whether this holds the car back.

From behind the wheel, the cabin feels solidly built, but the plastics used throughout the interior look cheap compared to the other cars on our fleet. And over the coming months, we’ll find out what it’s like to live without luxuries such as electrically adjustable door mirrors and winding rear windows.

Given the £7,245 price tag, the limited standard kit list isn’t a surprise – and we can see some advantages for a car designed for city centre driving. For example, we won’t have any expensive-looking alloy wheels to kerb, while the unpainted door mirrors will stand up better to the inevitable scrapes in heavily congested streets.

Our car does without the stability control that’s standard on the top-spec SZ4, plus we’re missing out on curtain airbags. However, side airbags are fitted, as is air-con – good news in the recent warm weather.

Sadly, the Suzuki has already blotted its copybook. Plugging our phone charger into its 12V socket blew a fuse, which also put the radio out of action.

At least we’re enjoying the Alto’s lightweight construction. It tips the scales at only 885kg, which helps performance. We’re still running it in, but the tuneful 996cc three-cylinder is clearly keen to rev and smooth.

While we’ve yet to decide which staff member will get the keys, there are sure to be many takers. With its strong economy, compact body and light controls, the Suzuki is very well equipped to cope with the demands of driving in our congested capital.

The Alto’s raucous three-cylinder engine is perky, willing and sounds great. Parking in London is always a headache, so when I had to take three friends to a concert, we took the Alto. It paid off, because we found a space that a larger car just wouldn’t have been able to use. However, so far the gearbox has been a little notchy and you have to reach across the car to open the electric front passenger window – the only switch for it is on the passenger door.