Fond farewell to city car – which has proved a big hit for carrying kit! 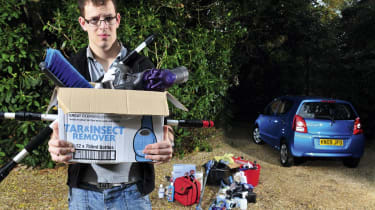 I have unloaded our Suzuki Alto for the last time. Over the past six months, the city car has helped me transport kit for all sorts of product testing – it’s swallowed gallons of cleaning equipment, a festival-worth of picnic sets and a garageful of toolboxes.

Ferrying around this amount of gear on a regular basis would be a big task for any vehicle, let alone an entry-level runabout. And the Alto, with its bargain-basement roots and small dimensions, has proved hugely versatile. However, there have been a few compromises along the way. Boot capacity is a meagre 129 litres so, to squeeze in all my products, I usually had to fold the rear bench flat – which liberates a useful 774 litres of space. The downside of this arrangement is that the chairs don’t sit flush when collapsed, and there isn’t a split function.

On the move, the characterful Suzuki consistently impressed with its eager nature. Short overhangs, compact dimensions and sharp steering ensure it’s extremely agile, particularly when negotiating city streets. The tuneful three-cylinder 1.0-litre petrol engine always feels keen, and helps the car to keep up with motorway traffic. As there’s no sixth gear, though, the powerplant sounds busy at high cruising speeds, which ensures that long trips on A-roads and M-ways are a chore.

Inside, the extensive use of glass helps to give the small cabin a bright and airy feel. Standard air-conditioning and a CD player further add to the appeal of our SZ3 model. Take a closer look, though, and you’ll soon spot where Suzuki has made some savings. For instance, the glovebox doesn’t have a lid, so its contents remain on display. Plus, the plastics and switchgear look and feel cheap. Further penny-pinching measures are evident in the back, where passengers get fiddly pop-out windows instead of traditional wind- down glass. And on the outside, it features plastic wheel trims rather than attractive alloys.

Even after six months’ hard use, the exterior is still in good condition. So it should, given that it’s been subjected to a battery of cleansers and polishes – the £365 optional metallic blue paintwork has probably seen more wax than a visitor to Madame Tussauds!

One of the highlights of Alto ownership is the low running costs. Thanks to CO2 emissions of 103g/km, the little Suzuki sits in road tax band B, so a year’s disc costs £35. Plus, it has averaged fuel economy of 43.5mpg during its time on our fleet – impressive considering the mix of stop-start urban traffic and long motorway runs it has been faced with.

The good news continues when you look at the insurance bills – the Alto has a low group two rating. If only depreciation hadn’t taken such a toll on our model’s value. We’ve calculated that the Suzuki is now worth a huge £2,245 less than when it arrived in May. But that takes nothing away from the Alto’s charm. With its entertaining driving experience, decent practicality and low running costs, this car will be a tough act to follow.

Like Jamie, I had to use the Suzuki in two-seat mode, flipping over the rear bench in order to squeeze in all my camera gear. While the Alto managed to accommodate all the equipment without complaint, there was no security cover – so I didn’t leave the car unattended for long. On the move, though, the Suzuki always impressed with its eager engine and excellent agility. Only on long journeys did driving it become a little tiresome – an aux-in socket for my iPod would have made such trips easier.