Indian-built city car will appeal to buyers on a budget. 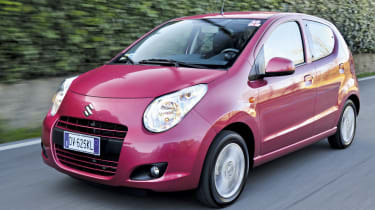 It's hard to criticise a car which is as simple and honest as the Alto. Despite its drab interior and anonymous styling, the Suzuki is eager to impress, but comes up short when compared to similarly priced and more characterful rivals. The Alto is adequately built and a capable performer around city streets, but despite its low price and running costs, its spartan spec and old-hat feel mean it’s hard to love.

The best things come in small packages, and to prove it, Suzuki is bringing its tiniest model to UK showrooms.

The Alto was first launched in Britain in 1979, but last appeared in 2006. To coincide with its 30th anniversary, the seventh-generation version has now been released.

Built in India, the 3.5-metre long micro-hatch will be badged as a Maruti over there, and shares its platform with the upcoming Nissan Pixo.

It’s unlikely to win any awards for innovation, though. From the 1.0-litre three-cylinder engine to the shape and interior, the Alto is the definition of simplicity.

A slab-sided profile and upright stance make for easy manoeuvring. However, the 129-litre boot is really small, and limited access makes stowing luggage awkward.Behind the wheel, the Alto is a well mannered and enjoyable drive in the city. The thrum of the engine means it doesn’t feel slow, but road noise and the ride quality deteriorate when you put your foot down. There’s quite a bit of body roll in corners, too.

Inside, the instruments are functional and easy to use. The upmarket SZ4 we drove had a neat dash-mounted rev counter, but even in this model the wraparound grey trim looks dull and the plastics feel cheap.

On the plus side, the seats are comfortable, and there’s a decent amount of cabin storage, even though the glovebox has been ditched in favour of a simpler shelf.

Ultimately, ownership costs could tip the scales in the Alto’s favour. It returns an impressive 64mpg and produces only 103g/km of carbon dioxide – meaning super-low running costs. A planned stop-start model will bring emissions down even further to 95g/km, so you won’t have to pay road tax, making the car more appealing.

Rival: Citroen C1 Clever design, sprightly handling, low tax and bargain finance deals ensure that the French company’s C1 is one of the cheapest, most fun city cars around.