New look and greater efficiency make baby even bigger in the city. 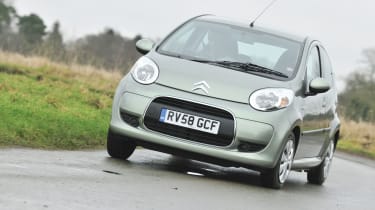 If you live in a city, it’s hard to justify driving anything but a C1! With class-leading emissions and exemplary fuel consumption, the latest model will appeal to green buyers and penny-pinchers alike. But it does so without sacrificing fun. The lively three-cylinder engine loves to be revved, and offers a rasping exhaust note that makes city traffic fun. It’s also very efficient, so the Citroen costs £35 a year in road tax band B and sits in the lowest benefit in kind bracket. Plus, it promises excellent residual values

How low can you go? That was the question asked of Citroen’s engineers, and here’s what they came up with! Not only has the C1 city car received a minor facelift, but courtesy of a few subtle tweaks, the 1.0i version driven here is now the least-polluting petrol car in the UK.

Exterior updates are focused on the front end, where a more rounded set of headlights and wide-mouthed grille work well, and bring the styling in line with the C3 Picasso and C2. Two new paint shades have also been added: Electra Blue and the Mica Green of our car.

Climb inside and the cabin is as simple and spartan as ever, with the switchgear taking on the usual funky look but cheap feel. Yet the optional air-con and half-leather seats of our model make it a comfortable car in which to commute.

Despite its greater efficiency, the 68bhp three-cylinder engine is eager and produces a surprisingly sporty exhaust note. And as there’s only 805kg to haul along, acceleration is more lively than the 13.7-second 0-60mph sprint time suggests.

On rutted city roads, the ride is compliant and soft, although some body control is sacrificed in corners. But the C1 always feels playful rather than heavy footed – this is helped by the light but direct steering.

Drive it on motorways or B-roads, and a lack of pace and excessive road roar becomes apparent. But this can be forgiven as the car is so far from its natural environment.

The Citroen is exactly what city driving should be all about. It’s cheap and cheerful, but you’ll never feel short-changed. And as it’s so light, it combines its peppy performance with strong economy and most of all fun.

Even at 30mph, the C1 is involving. So the changes have made a great car even greater.

Rival: Renault Twingo Despite its strong image and impressive bloodline, the new Twingo struggles with its poor-quality finish and sluggish pace. Still, the Renaultsport version goes some way to salvaging its reputation, offering genuine hot hatch performance on a budget.