The new Citroen C1 is a step up from its predecessor, with good refinement and a sense of fun 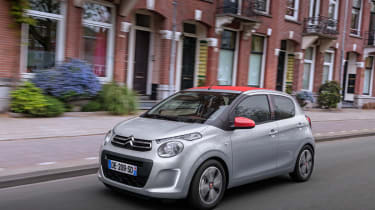 The new Citroen C1 is a step up from its predecessor: whether you’re a fan of its styling comes down to personal taste, but the fabric roof and large touch screen are useful selling points. Refinement is excellent while cruising, plus put your foot down and this PureTech engine is bursting with character. The new C1 isn’t a game-changer, but it should appeal to young and old customers alike.

With the C4 Cactus stealing all the headlines, the arrival of an all-new Citroen C1 city car has largely slipped under the radar. But the C1’s importance shouldn’t be overlooked – more than 760,000 examples of the first-generation have been sold worldwide since 2005, and the market for small cars is climbing almost as fast as SUVs.

Once again co-developed alongside the Toyota Aygo and Peugeot 108, the C1 shares its chassis, large chunks of bodywork and interior with its sister cars, although Citroen has pushed hard to differentiate it as much as possible.

The front-end styling bares nothing in common with the Aygo's bold ‘X’-shaped graphic, or the 108’s swept back lights and tidy front grille. Instead, Citroen’s design department has managed to cram in its signature two-piece headlight arrangement, with vertical LED running lights integrated into the bumper. At the rear there’s 3D-effect taillights and a glass tailgate, while blacked-out A-pillars create the illusion of a wraparound windscreen. 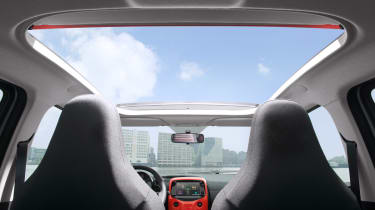 Besides Citroen badges the interior architecture is identical to the Aygo and 108, but that’s no bad thing. Snap-on coloured trim for the centre console and gearlever surround, flashes of exposed paintwork on the doors and an choice of vibrant seat fabrics does just enough to distract from the fact that the quality of materials isn’t quite up to scratch with the rival Skoda Citigo.

What the interior lacks in premium feel it makes up for with technology. The instrument pod attached to the top of the steering column is pleasingly futuristic, while the seven-inch touch screen (standard on our mid-spec ‘Feel’ test car and above) can be hooked up to an Android smart phone to mirror its screen on the central display and piggyback music and navigation apps.

With the same basic platform and dimensions as its predecessor, it’s still a squeeze in the back and headroom is tight, while the 196-litre boot is designed for slim shopping bags, not large suitcases. However, fold the split rear bench down and there’s a useful 780 litres of space. 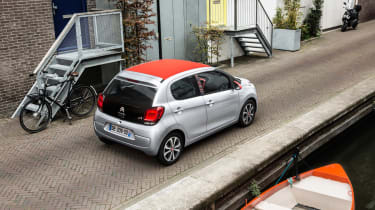 Our test car was also an Airscape model, complete with a sardine can-style peel back fabric roof. Wider than the fabric ‘sunroof’ fitted to the Toyota Aygo, it’s good value at £850 more than the metal-top model, and adds an element of fun when the weather’s good.

On the road the C1 feels strangely familiar, with the same bouncy ride and loose body control as its predecessor (not surprising given the carried over underpinnings), but that doesn’t mean it’s not fun. Light but direct steering is well-judged for weaving through traffic, while refinement at all speeds has stepped up significantly with less roar from the wind and tyres and fewer bangs form the suspension.

The new range-topping 1.2-litre three-cylinder PureTec engine (effectively a non-turbocharged version of the 108bhp unit in the C4 Cactus) is a gutsy performer, too. Leave it in a third gear around town and there’s enough torque to pull away smoothly from crawling speeds, keep you foot planted and it revs cleanly to the limiter with a warble from under the bonnet.

There are some unwanted vibrations at idle and the manual gearshift could feel a bit tighter, but in many ways this new powertrain sums up the new C1 perfectly – there are a few rough edges, but overall it’s full of fun.