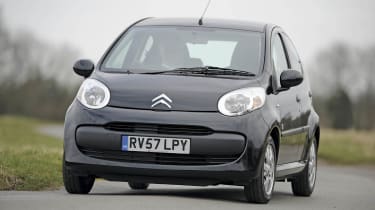 A well equipped car for the class, the C1 Code is trying hard to create a sense of occasion – and nearly pulls it off. There are classy cosmetic touches, and the driving experience is energetic and involving. However, at £8,795 for the five-door version, it’s hard to see who is going to want one. Buyers in this sector usually rate value and fuel economy above all else, rather than a sea of options that increase the weight and price of the car. The Code is a nice idea, but does the world really need a C1 with leather seats?

Only a few months after its launch in the UK, the Fiat 500’s cute, retro looks and effortless class have forced other brands to raise their game.

And that’s what Citroen has done with the Code, the latest evolution of its capable C1 city car. The idea is simple – create the most luxurious C1 to date. But is it a classic case of over-egging the pudding?

Using the range-topping Rhythm trim as a starting point, Code spec piles on the options, including 14-inch alloy wheels and black metallic paint.

The interior gets leather and Alcantara trimmed seats, along with bold chrome accents on the dashboard and doors. Add those to the Rhythm’s standard kit, and you’re left with a very well equipped city car. It’s surprising, then, that buyers still have to pay extra for air-conditioning. All the same, the sporty alloys, jet-black paint and liberally applied chrome add a touch of class.

If it wasn’t for two particularly clumsy features inside – an unsightly slab of metal on the door panel and comedy-sized dials for the optional air-conditioning – its visual appeal would run the Fiat 500 close.

On the road, in common with other versions that we have tested, the new C1 provides a frantic and fun driving experience. Its peppy 1.0-litre engine occasionally lacks power, but makes up for any shortfall by offering plenty of enthusiasm.

With the effortlessly light steering and a raspy exhaust note, the C1 is entertaining. In corners, there’s no sliding around in the seats, although that has more to do with the Alcantara providing some resistance than any sign of bolstering. There’s also a feeling of being connected to the road surface that you simply don’t get in a larger car.

In terms of practicality, you have to choose whether you want to carry four occupants without much of a boot, or fold the rear seats down to create a reasonable loading space, but have room for only two.

Either way, the C1 is impressively economical, returning 60mpg on the combined cycle and emitting only 109g/km of CO2.

So does the C1 Code work as a package? Well, while you can currently snap one up for £7,945 with some cashback offers, the five-door we drove costs £8,795. And that’s the same as a mid-spec Fiat Panda 1.2 – which provides a big step up in comfort and space.

Cit-roen’s strategy for tempting C1 buyers away from its Toyota Aygo or Peu-geot 107 siblings has always involved undercutting them by several hundred pounds. However, it looks as if the French firm has wandered too far from that philosophy with this trim.

The city car market is becoming an increasingly tough sector – and Citroen simply hasn’t done enough to crack it with the Code.

Rival: Fiat 500 The car that defines how far Fiat’s come in recent years has cute looks and is great to drive around town. It’s not so good on motorways, but makes up for its shortcomings with lots of character and desirability.