Do updates to the Citroen C1 go far enough to keep it competitive? 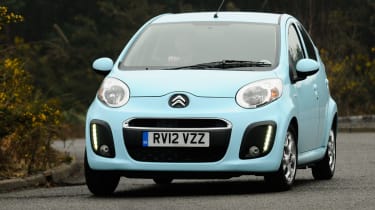 Updates have broadened the Citroen C1’s appeal: it looks and handles better. But things have moved on since it was introduced in 2005 – the VW up! has redefined the level of refinement available at this price. And if you want value for money, the Hyundai i10 is a much better choice.

Impressive new models like the VW up! have jolted rival city car makers into action. Citroen has refreshed the C1 and slashed its price in an effort to stay competitive.
The revised car’s starting price is a familiar £7,995 – exactly the same as the up!’s – and it has been given a new front end with a redesigned grille and a pair of stylish LED daytime running lights.
Improvements to the interior reflect Citroen’s push upmarket and include better trim quality, a leather steering wheel and gearstick gaiter, plus optional leather/Alcantara upholstery that was fitted to our car.
Tweaks to the 1.0-litre three-cylinder engine mean power remains at 67bhp, but CO2 emissions drop from 103g/km to 99g/km in five-speed manual cars. Performance is good: the C1 can cover 0-62mph in 12.3 seconds – almost a
second quicker than the fastest up! – but it doesn’t encourage you to use lots of revs like the VW does.
The up! has set a very high new benchmark for city car refinement, and unfortunately the C1 doesn’t compare well. You’ll hear plenty of wind and road noise in the compact cabin.
On the plus side, the suspension is supple and tweaked shock absorbers make the ride perfect for tackling potholed city streets. The downside is that it’s not the most agile car, but it’s still fun to drive thanks to quick and responsive steering.
This range-topping C1 costs £10,000 – exactly the same as the well equipped Hyundai i10 or more capable High up!. It’s still a great city car in its own right, but newer and better-value rivals are starting to diminish its appeal.
Share this on TwitterShare this on FacebookEmail