The Citroen C1 Furio is cheap to run and looks good, but lacks the ability of its rivals 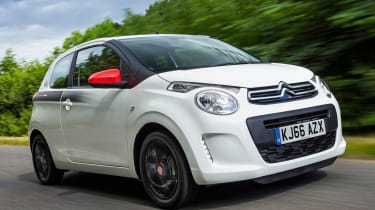 The Citroen C1 Furio might not be a hot hatch, but it could be worth a look if you want to save a bit of money and still end up with a sporty city car. It looks good, the engine is efficient and fun to use, and the equipment list is pretty good too. However, the C1 is completely outshone in all these respects by the Skoda Citigo. The Skoda is better to drive, more spacious, cheaper and feels more upmarket inside as well.

Don't let the racing stripes, roof spoiler and central exhaust tip fool you: the Citroen C1 Furio isn't a hot hatch. It uses the same 81bhp 1.2-litre three-cylinder petrol engine you can find in the rest of the C1 range, and there's the option for an even smaller 1.0-litre unit too with 67bhp as well.

The C1 Furio is aimed at younger buyers wanting something a bit sportier-looking, but without the extra insurance costs that come with a more powerful engine. There are definitely cost savings too, as this model manages an impressive 65.7mpg and emits just 99g/km of CO2. 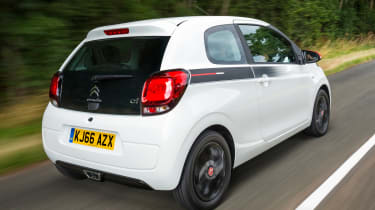 So it's cheap to run, then, but the good news is that it's also cheap to buy. The car we tested costs £11,205, but put down a £2,000 deposit and you can drive the car away for just £145 a month on a Citroen finance deal. With standard kit that includes those sporty exterior additions as well as 15-inch alloy wheels, a rev counter, air-conditioning, electric windows and a touchscreen infotainment system, that looks like pretty good value.

The Citroen C1 is good to drive too, just like many light and nimble city cars - but when you put it next to rivals such as the Skoda Citigo it starts to lose some appeal. The steering is light, which makes the car easy to drive in town but works against it on the open road, where the lack of feel means it's not as good in the corners. The ride is pretty good over bumpy roads, but that means it rolls a lot in corners as well.

The gearshift from the five-speed manual is a bit notchy, but it's still satisfying to use and works well with the 1.2-litre three-cylinder engine. It's not the fastest car around, but the car feels nippy at lower speeds and being a three-pot, the engine sounds good too. The 0-62mph sprint takes 10.9 seconds, about on par for the class, and with 116Nm of torque at 2,750rpm the 1.2 is more than enough for the C1 to keep up with traffic.

It can get a bit noisy inside, but that's expected in a small, cheaper car like this - and many won't mind the pleasant thrum from the engine. At higher speed, wind and road noise means you'll have to turn the radio up to hear it clearly. 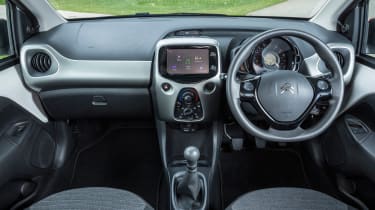 Again, though, the C1 Furio falls behind when you put it next to something like a Skoda Citigo Monte Carlo, which also has sporty styling but is also much more fun to drive, and feels more grown up inside as well. The Citroen's interior is charming, with some nicely designed features, but it doesn't feel as plush as its rivals.

The C1 Furio is only available as a three-door, which means it's not the best for transporting people - climbing in the back is a bit of a fuss for taller passengers, and they won't want to stay there long. It's suitable for short trips, and young children, but rear legroom isn't the C1's strong point. Likewise, the 196-litre boot isn't a particularly useful size or shape but you can fold the seats down to free up 780 litres.