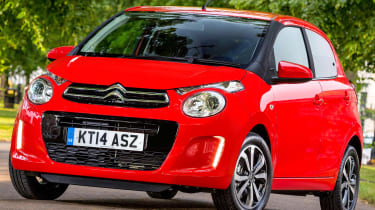 Citroen has rediscovered distinctive design in the past few years and the C1 is a great example of that. This neat-looking car stands out in a crowd and costs very little to run, but some of its rivals offer a more complete package. The C1 is easy to drive and if you buy a range-topper you get lots of equipment, but the interior is cramped and feels a bit low-rent in places. The warranty also only runs to three years, and while this is pretty normal within the market, the closely related Toyota Aygo has a five-year guarantee.

Citroen has a rich history of creating economical cars. Perhaps the greatest one ever made was the 2CV. Launched 70 years ago, it was simply bursting with charm and clever design.

Things have moved on since then, and while the 21st-century city car has to be a lot more accomplished than one from the forties, that hasn’t stopped the C1 being fun, distinctive and cheap to run.

This Mk2 model is also easy to drive (if not especially rewarding), thanks to its compact dimensions, light controls and comfortable ride, making it ideal for city streets. But if you look more closely there are chinks in the Citroen’s armour, so read on and we’ll tell all. 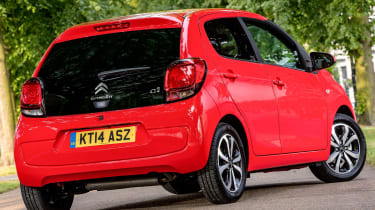 The C1 Mk2 arrived in UK showrooms in July 2014. Buyers could choose between three or five doors, and while the original version was offered with a diesel engine, the new one came only with 1.0 (VTi 68) or 1.2-litre (PureTech 82) petrol units.

Three trim levels were offered: Touch, Feel and Flair, with the latter also being available in Airscape form, which brought a full-length sliding cloth sunroof. Cars with stop/start are known as e-VTi, while ETG models have a clutchless gearbox.

The 1.2-litre engine feels usefully more nippy than the 1.0-litre; if buying the latter avoid the ETG transmission because it isn’t as slick as the manual. 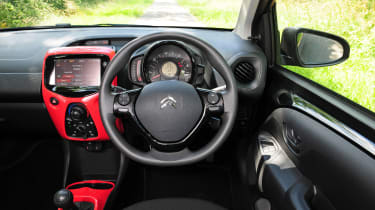 Alternatives to the Citroen C1 Mk2

The C1 faces tough competition, not least from the Kia Picanto with its big-car feel, generous equipment, keen prices, excellent reliability and long warranty. All of these traits also apply to the Hyundai i10, which is closely related to the Kia. The VW Group trio (Volkswagen up!, Skoda Citigo, SEAT Mii) are also very talented, refined and cheap to run.

But the Citroen’s closest rivals are the Peugeot 108 and Toyota Aygo, which are the same car but with different badges; they share most of the C1’s attributes. More left-field options are the Renault Twingo and its cousin, the Smart ForFour.

No C1 comes with a spare as standard; a £70 space- saver was optional on all models.

The rear windows don’t wind down on five-door models. They pop open, which limits ventilation.

Mirror Screen software is worth having, but pairing with a phone can be a tortuous process.

The Citroen was awarded four stars in its Euro NCAP crash tests, which is a decent result for a model in the city car class. 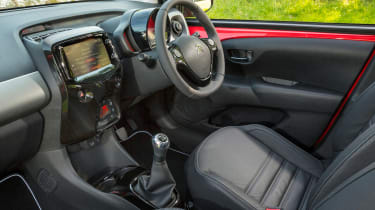 As a cheap city car the C1 isn’t luxurious inside, but it isn’t too spartan if you avoid entry-level versions, which do without height adjustment for the driver’s seat.

The quality is okay, if not up to Hyundai i10 or Skoda Citigo standards. Those models have a more intuitive dash layout, extra rear seat room and a bigger boot, but they’re more sombre inside than the C1.

From a C1’s third birthday it’s eligible for discounted maintenance, with check-ups alternating between minor (£140) and major (£250). However, the fourth service costs £385, because extra parts are needed. 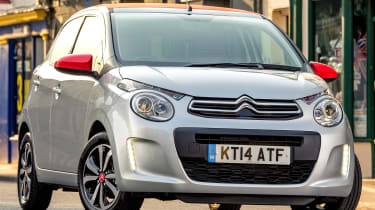 Dealers can also offer pattern parts at reduced prices. Called Essentials, these cut-price services are pegged at £115 and £195. All C1 engines are chain-driven, so there are no cambelts to replace, and this helps to cut the cost of routine maintenance.

The C1 Mk2 has been recalled twice in four years. The first campaign affected three cars built in November 2014. They were called back in January 2015 for an incorrectly constructed front bumper that could fail in a crash.

The second recall came in June 2016. Some C1s produced in September and October 2014 were fitted with a sub-standard steering column which could fail.

Coming 59th out of 75 cars in our Driver Power 2018 survey is okay rather than spectacular, but it’s still better than the Hyundai i10 and Kia Picanto. Low running costs are easily the C1’s star attraction; everything else is below average, with practicality, ride, handling and safety all rated poorly by owners in our poll.