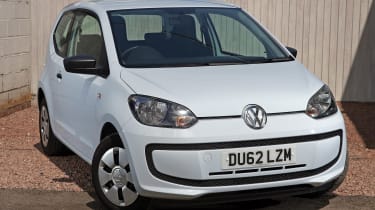 In the automotive sector some of the biggest strides have been made in the smallest cars in recent years, and the up! is proof of this. No longer do you have to settle for low-rent plastics, minimal equipment, poor refinement or a lack of space. True, an entry-level up! doesn’t bring much kit, but something further up the range offers decent luxury. At our recent New Car Awards the revised up! scooped the Best City Car crown; buy a used pre or post-facelift model and you’re getting an even better deal.

It’s fair to say when the Volkswagen up! arrived in 2012, it put the cat among the pigeons. VW is no stranger to creating desirable (if conservative) products, but after its decidedly lacklustre Fox city car, few people expected such a talented machine to emanate from the German brand.

So capable is the up! that when we first drove one in 2011, we said: “If you want the best city car around, look no further. The expertly packaged VW is spacious, stylish and fun to drive, but the real magic emerges on longer drives as the up! is more refined and comfortable than any of its rivals. The city car sector has a new benchmark.” 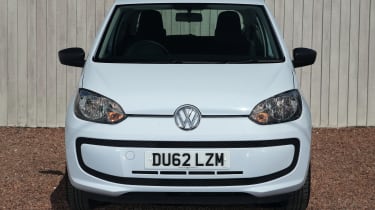 The three-door up! arrived in March 2012, offered only with a 1.0-litre three-cylinder engine in either 59bhp (60PS) or 74bhp (75PS) guises. Initially all cars came with a five-speed manual gearbox, but from August 2012 five-speed automatic and five-door options were introduced.

At launch there were Black and White special editions with cosmetic upgrades like alloys; by July 2013 there were also Groove up! and Rock up! specials, with upgraded hi-fi and bodykits/decals respectively. The electric e-up! appeared in January 2014 (at £24,250, less a £5,000 grant).

A facelifted up! reached showrooms in August 2016 with a revised dash and exterior design, an 89bhp 1.0-litre TSI engine option, improved connectivity and more personalisation choices.

Only you can decide how many doors you need, but we’d recommend sticking with the manual gearbox if possible because it’s much nicer to use than the auto. Every up! is a strict four-seater, and whichever power output you choose you’ll get similar fuel economy; the 1.0 TSI in the few facelifted cars on sale used is rare, but usefully more zippy. The sparsely equipped entry-level Take up! gets steel wheels and a two-speaker stereo; the mid-range Move up! adds air-con, remote central locking, a split-folding rear seat, electric front windows and driver’s seat height adjustment. 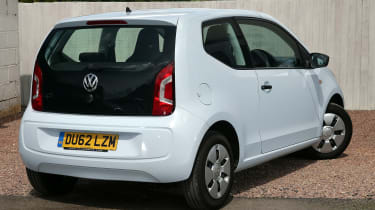 Alternatives to the Volkswagen up!

The closest rivals to the up! are its SEAT and Skoda cousins, the Mii and Citigo. Both offer the same blend of attributes as the Volkswagen, but at lower prices.

Also closely related to each other are the Kia Picanto and Hyundai i10, which offer stronger value and better warranties, plus levels of build quality and reliability that are equal to the Volkswagen’s. The Citroen C1, Toyota Aygo and Peugeot 108 are all different versions of the same car and they’re all worth a closer look, but even though they’re newer than the VW, they don’t feel quite as grown-up.

If you want something with lots of character, the Fiat 500 might appeal; its interior is cramped, but it’s still fun to drive.

A lot of owners have had problems with heavy condensation on the inside of the windscreen during the winter months. Air-con often helps to clear it. 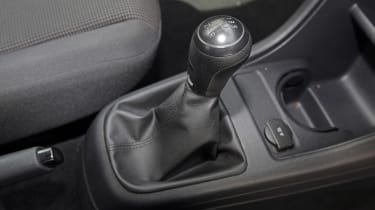 A clunking noise when changing gear (on manual models) seems to be more of a refinement issue than a fault with the transmission.

But a few early cars did have problematic gearboxes, and some of these needed to be replaced within just weeks of delivery.

Cars featuring the standard RCD215 radio can suffer from poor reception. Fitting a longer aerial can improve the sound quality.

The up! isn’t lavish and in places it even appears a little cheap, but the cabin is clearly laid out and generally feels durable. There’s seating for four people, a 251-litre boot (or 951 litres with the seats folded) and the removable Personal Infotainment Device is a really neat space-saving touch. Upgrade from an entry-level model to get more luxury. 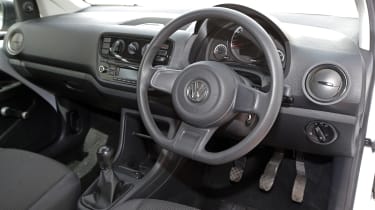 All models use the same three-cylinder 1.0-litre petrol engine, so have the same service interval. That’s set at every 12 months or 10,000 miles. Check-ups alternate between minor and major, priced at £118 and £163 or £164 and £329 once a car has reached its third birthday.

Although a timing belt is fitted, there’s no set interval to change it. From 60,000 miles it needs an inspection every year; it’s then replaced when it has started to degrade. It should last at least 100,000 miles, but when it is due, expect to pay £434 for the work.

Brake fluid has to be replaced after three years then biennially (at £64). Coolant is checked at each service.

The up! has been recalled four times, the first two because of airbag faults. Cars built between January and March 2013 were called back in May 2013 because faults might not be flagged up; the airbags could go off for no reason in cars made between February and August 2014. 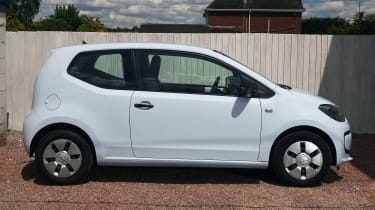 In June 2016, examples of the up! built from November 2015 to April 2016 were recalled over failing child locks. In September 2016, cars made between February and April 2016 were called back because sunroofs could detach.

The up! just scraped into this year’s Driver Power survey, in 75th; last year it was 111th and in 2015 it ranked 56th. The car’s best score was for fuel economy and running costs, followed by reliability and build quality. Impressively, just two per cent of owners said they’d had a problem.