It’s finally coming, the Volkswagen up! GTI is the hot version of VW’s zesty city car and we’ve driven the prototype… 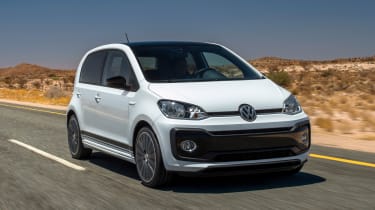 VW has given its smallest car a real grown-up GTI feel. Just like the Golf GTIs, the up! has that blend of fast fun and everyday usability. Our early drive shows plenty of promise with decent performance, the all-important GTI feel and excellent quality. It’s just a shame we’re going to have to wait so long for it.

You’ll have to wait twelve months before you can buy one, but the VW up! GTI will be well worth the wait. Amazingly, Volkswagen has managed to transpose the Golf’s grown-up GTI talents on to the brand’s smallest car. It’s not super-quick – a 0-62mph time of around 8.8 seconds proves that – but small fast fun isn’t only about a sprint time.

Although our South African test of a prototype model was rather devoid of corners, you could still detect a spirit in the up! GTI that could launch a new generation of hot hatch fans – especially when you realise the up! GTI’s stats are in line with the Mk1 Golf GTI that did the same thing 40 years ago.

More reviews for up GTI

The diminutive size of the up! means only a three-cylinder engine will fit under the bonnet, so power is from a turbo version of the 1.0-litre motor boosted to 114bhp. Engineers have given the engine a high-pressure turbo and an increased compression ratio to speed up reaction times, and that certainly bears fruit when you floor the throttle. 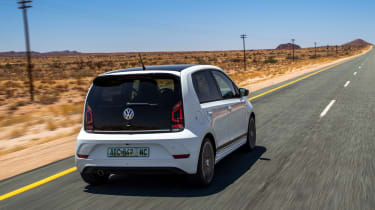 Second gear is a little too long for our liking (and those of the engineers who shrug and say simply ‘CO2’), but the three-cylinder engine’s rumble, plus the odd turbo whoosh, help to build excitement.

The steering feels meaty enough – the GTI’s rack uses plenty of Polo parts, as do the uprated brakes – and the car sits 15mm lower on sports suspension. Yet as in every up!, there’s a level of refinement at odds with the size of the car. It rode over rippled South African tarmac well, and with a sixth gear as opposed to the standard car’s five, it’s also quiet and comfortable at a cruise.

As with other GTIs, the up! doesn’t shout too loudly about its ability: stripes, a subtle rear spoiler and a visible tailpipe are the only real clues externally. Inside, things have been jazzed up with a black dash panel with tiny red dots in it (it looks better than it sounds), a sportier steering wheel and gearlever, and, of course, tartan seat cloth. If VW can keep the GTI’s kit to itself and stop Skoda and SEAT offering cheaper alternatives of their Citigo and Mii versions, this car will have huge appeal – as long as the price is right.