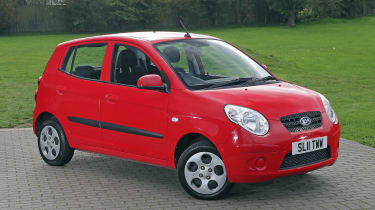 The original Picanto still looks smart, and it’s still good to drive thanks to its light weight and compact dimensions. Compared with the latest city cars – including the new Picanto Mk3 – the original Picanto is dated in terms of refinement, safety and equipment. But if finances are tight and you just need some seriously cheap transport that won’t let you down, the Kia should be a safe place to put your money. It’ll come as no surprise that the car isn’t remotely sporty thanks to Kia’s fitment of small engines, but if affordability and dependability matter more to you than performance, then the first-generation Picanto is a car that’s still easy to recommend.

If ever a car single-handedly turned round a company’s fortunes it was the Picanto, a city car that showed Kia was quite capable of producing genuinely great products.

Replacing the Pride with something better wasn’t a tough ask, but Kia really did exceed public expectations with the Picanto, thanks to the car’s accessible purchase price, relatively generous equipment, spacious cabin and generally excellent build quality.

It’s not bad dynamically, either, and running costs are low thanks to the real everyday prospect of 55mpg. Most Picantos have been very reliable, but with early cars now 14 years old, some problems have inevitably arisen. 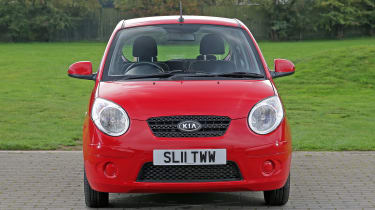 The Picanto arrived in the UK in May 2004 as a five-door hatch (there was never a three-door option) and with a choice of 1.0 or 1.1-litre engines. While the smaller engine initially came in entry-level GS form only (an even cheaper S edition arrived in June 2005), the 1.1-litre unit was offered in LX and SE specs, with a leather-trimmed SE+ being introduced in November 2005.

At launch, a diesel version was promised, but it never came to the UK. A facelifted Picanto appeared in January 2008: it had a new nose and tail, plus switched-around column stalks to put the indicator control on the left. The designations were also revised, with 2, Ice and 3 models above the entry-level car, known simply as Picanto. 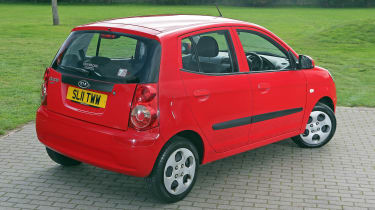 The entry-level 1.0 GS came with central locking, front electric windows and a CD/tuner, while the 1.1 LX added air-con, remote central locking, electric rear windows and door mirrors, plus an alarm. Unusually, while the GS and LX offered five seats, the range-topping SE only had space for four, along with alloy wheels, a slightly sportier exterior and front foglamps.

The 1.1 LX could also be specified with an automatic gearbox, which is unsophisticated but reliable. These auto cars are surprisingly costly to buy.

Alternatives to the Kia Picanto Mk1

The Ford Ka (1996-2009) is one of the best Picanto alternatives thanks to a plentiful supply, low running costs and great dynamics, although it was only ever offered in three-door form.

The Fiat Panda (2003-2012) came as a five-door only, but it feels more modern and engaging. The Citroen C2 still looks smart, but more comparable with the Picanto is the original Citroen C1 (or its Peugeot 107 and Toyota Aygo siblings). Cheap to buy and run, fun to drive and distinctively designed, C1s are great for economy motoring. Related to the Kia is the Hyundai i10, which was also a turning point for its maker. The Suzuki Alto is cheap, both to buy and to run, but it’s also very basic.

There is a canister of foam instead of a spare wheel, but the well in the boot floor can accommodate a full-sized wheel.

Anti-roll bar bushes dry out, leading to creaking from the steering on full lock, especially when pulling away.

If the idling is erratic on start-up, it’s usually a sticking idle speed control or faulty throttle position sensor.

Handbrakes can fail if the car has been left for a while, due to discs cooling and contracting, so check for play.

As long as you avoid entry-level models, the Picanto doesn’t feel too spartan, although it is clearly a budget car. A high roof line ensures the cabin feels airy and provides decent space for four. The seats are comfy enough, but there’s limited adjustment for the driving position. The boot is average at 220 litres, or 885 litres with the rear seats folded. 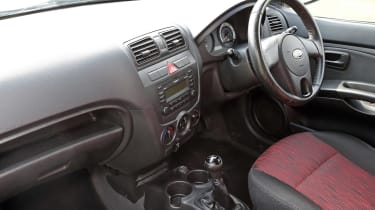 All Picantos need attention every 10,000 miles or 12 months, whichever comes first. Services alternate between minor and major, at costs of £169 and £359 respectively from a franchised main dealer.

A value service is also available for any Picanto, at £99; this is little more than an oil and filter change, along with a check over to ensure that the car doesn’t need further work. However, these urban runabouts are so mechanically simple that any independent garage will be perfectly happy to carry out maintenance on one.

The first-generation Picanto has been the subject of two recalls. The first was in June 2010 and affected cars built between October 2009 and February 2010, arising from the possibility of leaks from a cracked fuel pipe.

Recall number two was issued in December 2012, and affected more than 7,300 Picantos. It related to corrosion in the rear brake calipers, leading to the handbrake failing to hold the car on an incline.

While the Picanto Mk2 has frequently appeared in our Driver Power satisfaction survey, the Mk1 was never rated, despite its popularity. The car’s strengths are its low running costs along with reliability and ride comfort. It’s clear, however, that the Picanto is now dated when it comes to areas such as connectivity and safety.