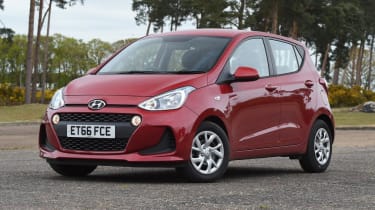 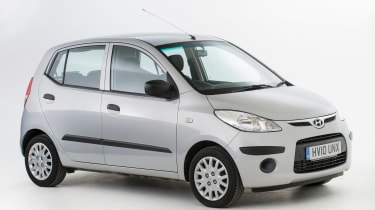 The i10 arrived in April 2008, as a five-door hatchback with a 1.1-litre petrol engine only, although there was a choice of five-speed manual or four-speed automatic gearboxes.

Just five months later, a 1.2-litre petrol engine debuted, with more power and torque, but the same fuel consumption and CO2 emissions. The ES special edition appeared in May 2009, six months before the limited-run i10 Edition arrived.

More significant was the revised i10, which went on sale in March 2011. The highlight was a new eco model, the Blue, with its 1.0-litre petrol engine replacing the 1.1-litre unit. It emitted only 99g/km of CO2.

At the same time, Active trim replaced Comfort, and the 1.2-litre engine’s CO2 emissions and fuel consumption were cut.

The 1.2 feels a lot more punchy than the 1.1-litre, so we’d go for the bigger engine. Interestingly, due to the i10’s popularity as a city car, there are lots of category C and D write-offs, which distort values at the lower end of the market. Buy with care. 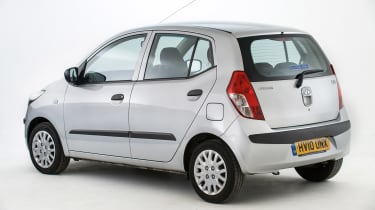 Alternatives to Hyundai i10 Mk1

For a city car that’s cheap to buy and fun to drive, consider the Mk1 Citroen C1, Peugeot 107 and Toyota Aygo, which were jointly developed and built. Equally good value is the second-generation Ford Ka; it’s also in plentiful supply, although kit is miserly and it isn’t as thrilling to drive as you’d expect. There’s a diesel Ka, but the petrol model is more fun and nearly as economical. 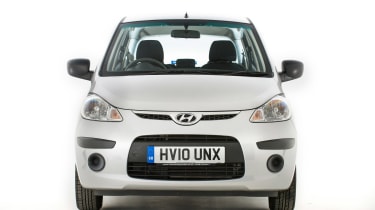 The i10’s Kia Picanto sister car is really cheap to run and well built, plus you get five doors, even if there’s not much room inside. If you have deeper pockets, check out another trio of co-developed city cars: the Volkswagen up!, SEAT Mii and Skoda Citigo. All are impressive, but as they didn’t arrive until 2012, they’re more costly to buy.

Some early cars can suffer from premature wear of the braking system because of the master cylinder not being set up properly.

The headlight beam adjustment switch can fail, and make an annoying buzzing noise; some replacement switches are no better, though.

Make sure that the clutch feels okay, as there’s no shortage of i10s that suffer from judder through the pedal; dealers are able to fix this, however.

The i10’s interior trim has been built down to a price, so it can get damaged all too easily. Watch carefully for worn or broken parts on any potential buy.

The i10’s high roof means there’s plenty of headroom in the front and rear, while you get seating for five – although three adults will find the back a squeeze. Rear legroom is adequate, and there’s more boot space than in most city cars, at 225 litres with the seats up or 910 litres when they’re folded. 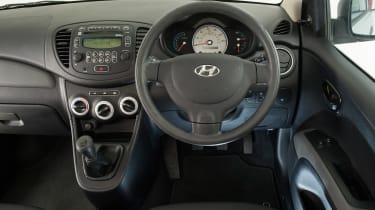 The i10 needed to have its first service after 12 months or 10,000 miles, but all subsequent check-ups were required after a year or 12,500 miles. These alternate between minor and major services, priced at £140 and £280 respectively, although for cars over five years old these costs are cut to £129 and £199. Dealers also offer a basic check-up, which consists of an oil and filter change, plus a visual inspection, for £89.

Impressively, the i10 hasn’t been recalled once. Indeed, since its launch in 2008, Hyundai has issued just 11 recalls across its entire model range – that’s an average of one every eight months, for cars that go back as far as 15 years. 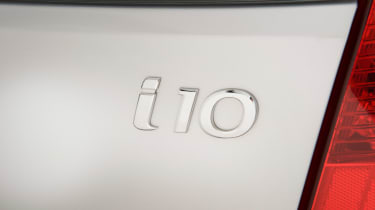 Of its current line-up, there has been one recall each for the ix20, the i30, the Veloster and ix35. That means buyers considering the i10 can focus on the usual checks on service history and mechanicals.

Our Driver Power satisfaction survey shows the original i10 has been left behind, but that’s not to say it’s not a good used buy. Whether you’re looking for a first car or an ideal urban runabout, the Hyundai should be on your shortlist – it was good enough to be crowned Best City Car at our New Car Awards in 2010 and 2011. At the time we said: “The i10 has the feel of a big car inside, while its composed driving dynamics mean it’s as at home on the open road as on congested city streets.” That hasn’t changed, even if the bar is now even higher in the city car market.